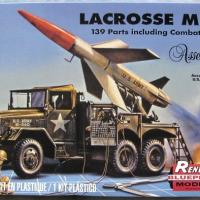 The LaCrosse missile was one of the first tactical missiles designed and operated by the U.S. Army during the early years of the cold war. Put into production in 1959, the missile was capable of carrying a variety of warheads, including nuclear, and was fired from the back of a modified cargo truck. Apparently there were numerous problems with maintenance and the system was dropped from the inventory by 1964. Looking back over fifty years, it gives me pause to reflect how casually we regarded the possibility of nuclear conflict back then. That Armageddon could be initiated by a couple of guys in a truck seems lunacy now, but that was the world in those days.

Revell is doing the modeling world quite a favor by releasing so many of these long-lost kits of yesteryear. This model was scarce even when I was a kid, and it’s amazing to think that this kit was first issued when modeling was still in its infancy. Heck, you couldn’t even get flat paints. A tube of glue was the total equipment inventory of the average modeler. The only other kit made of this particular vehicle was the venerable Adams (later Revell) in 1/40th scale, so unless some modern company chooses to tackle it this is the only LaCrosse currently on the market.

The box art is essentially fictitious, as it features the very specific rear fender design found on many of the test units, which this kit does not have. There is some online dispute about which make and size of cargo truck was actually used, but not being conversant with this bit I let the details go and just enjoyed the build.

Having never had the opportunity to tackle this kit, I thought I’d do a little extra work to try and bring it up to today’s standards, which for the most part I found easier than anticipated. For a kit of this age, the fit was surprisingly good, with a minimum of flash. The kit was designed in a time when the average modeler was a kid, and the simple construction and idiot-proofing of the assembly reflects this. All in all, it’s remarkable that such a well-designed kit came from an age well before CAD and computer engineering. There was very little filling necessary, although I did use some putty at the base of the rocket fins in order to seal the working part joints.

Typical of models from this period, this kit comes with quite a few working parts (opening doors, steering, rear axles, elevating launcher, etc.) plus some truly regrettable figures. For the most part these movable bits were more of a distraction than a positive feature and I elected to glue these in fixed positions. The figures, of course, went into the circular file. Part 6, which is the chassis, features a bumper with tow rings sticking straight out in front. A couple of simple cuts permitted these to lay down on the bumper in a more realistic manner.

The one item in the kit I found basically too crude to use was the fender-mounted jerry can. I replaced this with an old Squadron 1/32nd scale item I happened to have in my inventory, although really any 1/35th jerry can would probably do as well. I’ve seen online that some builders also replaced the front chassis lights with M.V. Products lenses, which seems like a sensible idea. Alas, I didn’t have the necessary sizes so had to forgo this modification on my build.

Other parts that really cry out for detailing are the boarding ladders. The real ones featured lightning holes on the support arms, and if you’re willing to take the time to drill these out it adds a lot to look of the final model. Another little niggle is the fuel line for the missile, which dangles rather oddly without some sort of attachment brackets to the launcher. I added these with some small strips of Evergreen. While you’re at it, it’s useful to hollow out the scoops near the rear of the missile for a more realistic appearance.

If I had the time and energy, I would have tackled modifying the various walkways on the truck bed. These should really be open grates. Since there are no photoetch replacements available that I know of, the only alternative is sanding down all five pieces from the back until the holes open up – an odious task at best. For the sake of my patience and sanity I elected to bypass this operation. An interesting note concerns the delicate walkway railings. Apparently these were often either folded down out of the way or simply not installed, so you can remove them without losing fidelity if you wish.

When it came time to paint, I chose to feature an operational missile rather than the test bed version featured in the kit. This easy conversion was accomplished by cutting off the nose probe and altering the markings. Although a lot of them were simply olive drab, I elected to go with a white missile. The contrast between it and its transporter is pleasing to my eye. All told, I have to admit it was kind of a kick painting this model with modern techniques and seeing this ancient kit come to life in a new way.

Despite its age, this is a relatively easy model to assemble with a low parts count and a surprisingly good fit, as long as you sand down any pin marks on the mating surfaces. If I have a wish list for this kit, it would be that someone would make photoetch grates for the launch bed and perhaps some new resin wheels with a more accurate tread. Even without these, though, it’s still a good looking beast.

My thanks to Revell for having the savvy to release this classic as well as to IPMS/USA for entrusting it to my fumbling fingers.