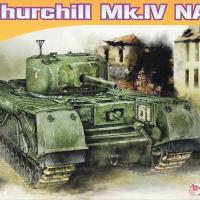 The Churchill Mk.IV NA 75 was a variant of the Churchill Mk.IV British tank, its main difference being that it mounted a 75mm main gun from the Sherman family of tanks rather than the Churchill’s six-pounder. Besides the main gun, the Besa coaxial and bow guns were replaced with Browning .30 caliber weapons. Some minor changes to the roof of the ‘standard’ Mk.IV turret were made to accommodate the new main gun.

The kit comes in the typical 6”X10” box that you get with 1:72 Dragon armor kits: the two-part variety that comes with a lid, rather than the dreaded opening end flaps. There’s a nice painting of an NA75 on the box top with kit information panels adorning the sides.

Dragon’s kit is in keeping with much of its 1:72 offerings: clean, crisply molded flash-free parts in a light gray styrene in a fairly easy to assemble motif. This basically means low parts count and more molded on or integral details.

So what do you get for your money? When you open the box, you’ll find 77 parts in three sprues (sprues A and B are conjoined) wrapped in separate plastic bags. Included in that part count are the hull top and bottom that come loose in the box. The use of slide-mold technology can be seen in the hollow main gun barrel ends and the louvres on the rear lower hull half, as well as in other areas. You also get two lengths of DS 100 plastic tracks (the soft kind) sealed in their own bag and a tiny 1-1/8” x 1-1/2” decal sheet in its own little poly bag. The sheet gives you three simple marking options: one for ‘C’ Sqd., North Irish Horse, Italy 1944 and two for Unidentified Units, Italy 1944. Unlike other 1:72 Dragon armor kits that I have in my stash, this sample did not have the tracks and decal sheet mounted to a card carrier.

The instruction sheet is also typical for Dragon small-scale armor kits: a folded over sheet that makes four pages. The sheet is in color and on glossy stock. It is easy to see the images on it and the assembly instructions seemed clear enough to me. There is a parts map that tells you which parts are not to be used for this kit (shaded in light blue) and color call-outs made in Mr. Color Model Master Color and Aqueous Hobby Color (not much use to a Humbrol and Model Master enamel guy like me). Speaking of the parts map, oddly, the illustration parts layout of sprue C on the parts map does not match the actual parts layout of the actual parts contained on sprue C. Parts 17, 7, 3, 13, 12, 14, 15 and 18 are not in synch. Not a big issue for me really, but just odd. Sprues A and B are fine.

As soon as this kit arrived on my doorstep, I fetched my copy of Ampersand Publishing’s “The Churchill Tank: A Visual History of the British Army’s Heavy Infantry Tank 1941 - 1945 (Part One: The gun tank, Mk I - VIII)” by author David Doyle. Thankfully, the book features a section on the NA 75. Here are some observations that I made on the kit as it compares to the photos of the actual tank found in my book and in general:

All of that being said, the kit is well presented, well molded and looks like it should go together without much problem. If you’re handy with an X-Acto and plastic stock, the problems I mentioned should be fixable - but again, check YOUR references. Would I buy this kit? Yes, I would. I love Dragon’s small-scale armor kits (I have a bunch of ‘em) and they are, for the most part, easy and fun to build and make fine looking replicas.

Many thanks to IPMS for allowing me the opportunity to review this kit and to Dragon USA for providing the review sample.