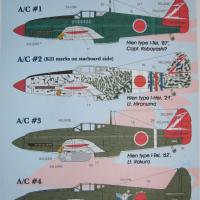 The 244th Sentai was formed in 1942 from the 144th Sentai with their primary mission being homeland defense. The squadron received the Ki-61 in 1943 and gained fame as an elite bomber interceptor unit. Detachments of this unit also served on Okinawa but the majority stayed in Japan for defense. A very good web site dedicated to this squadron can be found here http://www5b.biglobe.ne.jp/~s244f/ and you will need to translate it as it is in Japanese.

Lifelike decals have issued or re-issued decals for the Ki-61s of the 244th Sentai as parts 1,2 & 3. Initially produced for the Hasegawa kit, they could also be used on the Otaki kit. Now that Tamiya has released their kit you now have one more, and a really nice one, Ki-61 kit to choose from.

Upon opening the zip lock bag you will find 1 full sheet (tail markings, stripes, numbers, stencils…. etc.) plus 2 smaller sheets (hinomarus, numbers, propeller markings, wing leading edge) of decals printed in register and they look nice. The decals are printed by Microscale and I think they know how to print decals by now! You also are provided with 4 sheets of instructions including color profiles, captions for each of the aircraft and notes on the colors and markings of the 244th Sentai. This is one of the best-researched set of decals I have seen and the folks at Lifelike deserve a big thank you from those of us who like to build IJN and IJA aircraft.

Markings for the following Ki-61s are included:

Even though they were designed for the Hasegawa kit, the decals went on without any problems on my Tamiya kit, and with a little Micro set and Micro sol set down very nicely. One area of caution would be the stencils due to their very small size, just take your time and you will not mess them up like I did. If only it could be this easy all the time!

I recommend these decals for anyone with a Ki-61 in their stash. I would like to thank Lifelike for not only supplying these but also saving me by sending pictures (Thank you Keishiro Nagao!!) of the actual decal sheet. (In my excitement I started decaling and forgot to take a picture of it!!) I would also like to thank the Review Corps for letting me do this review and all of you for taking time to read it. Now let’s all put our trays in their upright position and get back to our workbenches…. TIME TO MODEL!!!