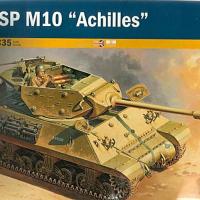 This is the Academy “Achilles” kit put into an Italeri box and marketed. The sprues all say Academy and the only difference is the decals and instruction sheet. The Academy kit is a gorgeous representation of the British version of the American M10 “Wolverine”. There are a few interior issues with stowage and rounds but it builds into a great model just the way it is.

What you get is the ten Academy sprues done in beautiful tan plastic, two vinyl T-62 riveted tracks, a 16-page instruction booklet, length of twine (for tow cable), and decal sheet to mark four vehicles. The vehicles are two Polish Division machines and two British vehicles. One of the British vehicles has a neat looking black and green camouflage pattern. The only first look issues are the interior turret plates. These are littered with ejector pin sink marks that are going to need to be cleaned up. The worst part is that these are mostly oblong instead of round ejector pits.

I will be turning this into an IDF Achilles. The Achilles in IDF service is very vague. There are currently two Achilles in Israeli museums and possibly a third in the bone yard at Latrun. Pictures of this vehicle are also scarce, both current and in use. I have four decent shots of the Latrun vehicle that I will use to make this conversion. The biggest issue appears that the IDF Achilles has the gunner station to the right side and a mounted .30 cal coax on the left side of the gun. The IDF Achilles appear to have the old gunner’s sight area filled and drilled for the MG and drilled a new one on the right side. The Latrun vehicle also appears to have a shot deflection indentation (it was hit by a tank round) on the mantlet as well (I will not replicate this). Another issue is that the left rear turret ready rounds were removed and replaced with what might have been a radio set or just left empty. As pictures are rare, I will wait until I have to make a decision on placement until the last minute.

Assembly started with gluing parts that could be easily done and then sanded. There was no sequence of events, just simple build and then assemble. As the assembly process continued, I was able to figure out what the vehicle is. I have been looking for the WRONG vehicle. What the Israeli’s used were the Achilles Mk IIc late models. Special thanks to Ron Bell for finding the pictures on Chris “Toadman” Hughes’ website. The turret assembly will go a lot smoother now. No one seems to be sure who completed the conversion. It could have been the Brits, the French, the Italians, or the Israeli’s. All used the Achilles post war and all, in one way or another provided the Israeli’s with arms. The “Toadman shots” show an Achilles with many of the features visible on the IDF Achilles including the converted interior.

Well, I lied about the turret assembly. One thing that I need more practice on is bending brass. I tried several times to get the breach recoil guards to match. No such luck. Instead of wasting more time in this area, I have given it my best and it will have to do. As I waited for parts to dry, I did some interior and suspension painting. The big difference between a standard M-10 and the Achilles is the rounds. The M-10 carried them in the provided cardboard containers but the 17 pounder rounds were left free in the stowage racks. By free I mean the rounds had no protective casings. So, I was going to need 17 pounder rounds and lots of them. There are several sources for 17 pounder rounds. They can be found in plastic, resin and metal. I opted for Verlinden’s resin set as it was the cheapest alternative. The rounds arrived and were clipped off the pour lugs. Considerable sanding was required on the primer rear shell cases. All were too large to seat into the Academy parts. After careful sanding and testing, all were painted brass and then the business ends were painted the appropriate colors and mounted into the ready racks. I also assembled the left rear hull ladder. The Latrun IDF vehicle has the four additional stand-off armor mounts for the turret removed. This was accomplished by simply sanding them off. Making the medium sized storage racks on the turret sides might prove hard with my inability to bent brass. We’ll see.

The bogies were given 48 bolts. These were made with my Grief bolt maker. There were four added to the track skids and four more added to the return roller mounting arm. The bogies also received four drilled out holes opposite the return roller arm. While I was making bolts, I made 16 more to use on the transmission cover to hull joint. Every Sherman kit on the market has missed this except Tasca and the new Priest from Dragon. A 1mm strip of plastic was added to the top of the rear hull plate (C1). This is required to allow the upper hull to sit square. If not, there is a noticeable rearward cant when attaching the two parts.

The turret sides also received two smoke launchers and the required wiring and firing devices on the insides. The vehicle was given an interior coating of Model Master Field Drab. I like this color and use it as it looks to contain more brown than green. I can add more military brown to make it browner to mix it up in different areas. After this dried, the interior was glossed and washed. It was then cleaned up and flatted for dry brushing. While paint and varnish were drying I started work on the exterior hull. I finished the left mounted ladder and rails, the fold down rear storage rack (this item required some modifications to fit the hull as it is not designed as a Sherman), added rear weld seams to the hull, filled the 17 pdr barrel mount, and added the two engine door stops to the upper deck. The kit barrel travel mount is wrong for an IDF vehicle and it will be replaced with one from an M50. This is a simple task completed by filling the mounting hole and attaching a travel lock from a spare Dragon M-50.

The turret front and sides were mated together. The left side plate did not mate up with the rear piece very well. Lots of glue, prodding and tape got it close. I added weld seams from stretched sprue to hide some of my assembly errors. While the weld seams were drying, I added the fuel can holders and many of the frontal accessories that make this an IDF vehicle. The parts not attached directly to the hull were modified with 30 gauge styrene punches made from my punch and die. The Israeli’s have a tendency to not mount anything directly to vehicle surfaces. They are usually attached with standoff mounting attachments. The front fenders are from the spares and made by Dragon, probably from one of my many leftover Sherman sprues. To the fenders I added sprue supports. Headlights were drilled out to add more real looking items. The horn was added and another Dragon leftover was added to guard the horn.

Though not correct for IDF use, I could not find an alternative for the two track shoe holders up front. The spare shoes provided in the kit are actually T-51 shoes, which are all the rubber type, and need to be replaced with the British T-62 steel riveted version which is what the vehicle is rolling on. Luckily, my spares box contained the six I needed. The front headlights are molded solid and were drilled out to accept more realistic looking lenses.

The vehicle finally received a complete coat of Field Drab and then the items needing paint before clear coating (BII) were painted. The road wheels were done with my handy Staedtler bold chisel tipped marker. The vehicle was then given a couple clear coats and set aside to dry. The vehicle was given a black pin wash and decals were applied. The decals are from the spares. The turret markings are from the old MP Models Adversary Series M-50 Sherman. These did not react well to Microscale Set and Sol and that is the reason the cargo was added. I needed to cover the decals as much as possible but still leave them visible. The hull markings are also from the spares and off an Academy Merkava. They applied well and looked great. The tracks were painted brown and glossed. They were gloss coated and black washed. Then they were flat coated and weathered. I used jet exhaust and aluminum as a dry brush. The final addition was the addition of "Sticko" lenses and glossing the rear marker lights.

I want to apologize to Italeri and the reviewer corps. This was supposed to be a review build and initially I thought it was a simple “add a few items” and it would be good to go. This ended up being more of a conversion but the kit itself is solid except for the [amunition] rounds issue. Have fun; build a tank destroyer.

I would like to thank Academy for making a great kit, MRC for providing the sample, Italeri for re-boxing a great kit and IPMS/USA for a place to post this review and help keep “treadheads” informed on recent releases.