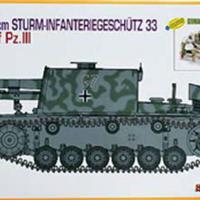 Editor's note: This kit is from Dragon's Cyber-Hobby line

As the battle for Stalingrad bogged down into house-by-house combat, a desperate need was seen for a large caliber gun, under armor protection, capable of destroying a building with just a few shots. The 15-cm heavy infantry howitzer was installed in an armored box-like enclosure mounted on converted Panzer III chassis. An initial batch of twelve vehicles were hurriedly built and shipped to the Eastern front, where they provided much needed fire support to the embattled 6th Army. They were assigned to StuG. Abt. 177. This was done partly because maintenance issues were simplified, since the Sturmgeschutz was built on the same Panzer III chassis. This initial batch were lost in the Stalingrad cauldron, while a further dozen vehicles were converted, rushed to the front, and assigned to Panzer Regiment 201, 23rd Panzer Division. They continued to serve until attrition took its toll. No more were built after the second batch of twelve.

The kit consists of 5 sprues of light grey plastic holding 232 parts, a lower hull, a small photo-etched fret with engine air inlet screens, and 2 bags of track links, left and right, with 108 in each. As mentioned, there is a 4-figure set of German infantry, in winter garb, with weapons. Construction follows a logical progression, from the ground up. Fit is generally good, though there is more than the usual amount of flash, as this is a reissue of the original SiG 33 kit, released quite a few years ago.

Steps 1, 2, and 3 cover the running gear, torsion bar arms, shock absorbers, etc. I painted the lower hull before installing the road wheels; it’s just easier to get behind everything. Step 4 covers the rear of the lower hull, exhausts, towing lugs, etc. Step 5 is track assembly. The track links are left and right handed, and are conveniently molded in different shades of grey, making it easier to keep them separate. Steps 6, 7, 8 and 9 involve the upper hull, gun and mount, and upper hull details. The upper and lower hulls are joined in step 8. Steps 10 thru 13 see the fenders built, stowage added, and the fenders attached to the hull. Steps 14 and 15 cover the addition of engine deck details, and the prominent storage box spanning the rear of the deck. I added several bits to this rather plain box; handles, hinges, latches, etc, as well as dinging it up a little. In steps 16 and 17, the heavy armored superstructure is built. I decided at this point to leave the rear doors open and add a partial crew. I added inside door handles, some latch detail, and a suggestion of the locking mechanism for the pistol ports. Two tow cables were made from nylon kite string and installed. I also shaved off the molded-on tow cable clamps on the engine deck, and replaced them with more accurately sized items made from printer’s plate. Steps 18, 19 and 20 finish construction.

I chose the dark yellow color with red-brown and green overspray. All spraying was done with Tamiya acrylics, followed by various washes done with oil paints. Some chipping and scratching was suggested by dabbing dark shades of grey and brown onto the model with a small piece of Scotch-Brite sanding pad.

I enjoyed building this kit again, as I had completed one soon after its initial release. I encountered no major fit problems, though as mentioned, there was a more cleanup needed due to the age of the molds most likely. If you have not done so, this is a great opportunity to add one to your collection, and the added figures suggest plentiful diorama ideas. My thanks go out to the I.P.M.S. Review Corps for allowing me to build and review this model. Have fun and keep on building.