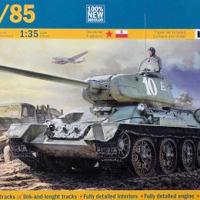 You can’t enter a discussion of World War II tanks that made an impact on the course of the war without the T-34 coming up somewhere along the line. While it was a surprise to the Soviets to see their “allies” attacking, the grit and determination of Soviet industry did not leave the attacks unanswered. While it may not be as aesthetically pleasing to the eyes, the design of the sloped frontal armor, rough weld lines, and wide tracks to accommodate Mother Russia’s terrible winters made it more than able to be up to the task of staving off German armor. Starting out with the 76mm cannon to fight off the Panzer III’s and IV’s of the time, the advances in design allowed for a new turret to house the much more powerful 85mm long barrel gun- which was more than a match for the dreaded Tigers and Panthers.

When I first heard of the kit, I was assuming it would be a rebox with maybe some new tracks and decals and such—maybe a new fret of PE. Looking further into things though, I quickly realized it was a whole new tooled kit—complete with an interior! Well—the box mentions a fully detailed interior and engine. While the interior is quite nice, the engine is a little misleading. You are only presented with what you might see looking in—the top half of the engine…and while it looks quite fine as such, it isn’t what is advertised necessarily.

There are five sprue trees molded in dark green and another light grey sprue containing the engine and transmission parts. A PE tree contains engine screens, spare track straps and buckles, and a frame for the engine compartment if you choose to open the rear hatch. Interior details include the fuel tank wall detail, two piece gun barrel, detailed driver’s and bow gunner’s station, gun breech details, ammunition storage and radio details for the turret, and a overall cast texture to the hull and turret exteriors. Two lengths of electrical wire are provided for you to twist your own cables- more on those later. Decals are provided for four schemes:

Construction starts straight away with the rear idler wheels- each made up of four parts. Nothing too overdone though- they look quite nice. From there, you move on to adding the interior wall sections to the inside of the hull. Next up is the transmission and engine—everything goes together quite smoothly and there were no fit issues when you go to install the subassembly into the hull.

Next up is the rest of the interior. Paint codes are provided for the interior sections and Italeri adds a nice top view of everything fitted in place so you can check on things before thinking of closing it all up. Road wheels come next—and the detail of these are quite nice…representing the “butterfly” design. Tracks are next- and there are sections for both the rubber band and the link and length type. I used the latter and things clicked in place quite nicely…although the fit using the number of tracks they instruct wasn’t quite right…I had to alter things a bit to get it looking alright.

Work on the upper hull begins next- showing the holes to be drilled and slots to be opened for the fuel tanks and such. Step 11 has a small typo- the side engine cover labeled 4B should actually be 4C. PE straps for the spare track links are a bit fiddly….there was a lot of holding of breath and heart stoppage here. Rear hatch, fuel tank assemblies, and front side of the hull follow…no real issues. Attaching part 1C- the top side where the turret plugs into was a tricky fit…it took some finagling. Tools and toolboxes and grab bars follow…and then you add the top half to the bottom. Things fit quite well, so I got right to adding the fenders and smoke discharger tanks. At this point you have the option of closing the rear engine hatch or leaving it swung open…but there were a lot of pin marks and the rear stubs of the exhausts showing through so I closed it up and left the smaller hatch open. The piece on the top of the hatch that is supposed to line up with the notch in the top hull doesn’t, and I couldn’t salvage it after trying to move it, so I used wire to replace it.

Gun breech and interior turret details were next and its really a shame to close it all up. It would’ve been nice to have a bit more direction for detailing this section up like was done with the crew compartments, but if you’ve got references, just use them. The gun mantlet and two piece barrel is next—really would’ve loved to see a metal barrel included or at least a slide molded one- but sanding and careful gluing helped.

The last two steps were all about taking the provided wire and creating your own tow cables. You are supposed to remove the rubber hose sheath and then twist the wires into some semblance of a cable. This is not so easy to pull off….the first one I had a difficult time getting the sheath off, and when I did finally the wires were so bent up and in disarray, I gave up. I carefully did the next one and tried twisting but it never really came out looking quite right. In the end, I used beading wire- so what you see on the finished model is not representative of what you get. If you have better luck creating your own, please post it on the IPMS site as I’d love to see someone more successful than I.

I chose the 44th Guards Tank Brigade scheme from Yugoslavia for mine—using AMMO by Mig Russian Green paint for the base coat. I then used their washable white for a whitewash, carefully removing it with a brush and water. It is essentially a white colored chipping fluid and works quite well. Decals went on quite nicely and I finished weathering the beast with some Streaking Grime for Winter Vehicles from AK Interactive, as well as some Mig weathering pigments.

I found the build to go quite smoothly and was quite pleased with the job Italeri did on their newly tooled Soviet T-34. I hope to see more newly tooled kits from them and would gladly add them to the stash! My sincere thanks to Italeri, MRC, and IPMS USA for the review sample.