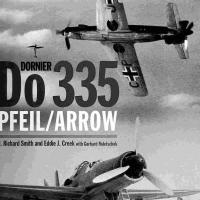 For fans of aviation, the names J. Richard Smith and Eddie Creek are well known for their unparalleled work on Luftwaffe subjects and the detail and history they put into their efforts. Their four volumes on the Me-262 is the definitive set on the subject. And now, they give this same treatment to the Do-335 Pfeil/Arrow. I will say upfront that if there is anything you want to know about this plane, get this book and it will be there.

The hardback book is 288 pages lavishly illustrated with color and black & white photographs as well as many drawings. The table of contests lists:

Creek and Watson cover the entire history from Dornier and its start through the war and then into production, operation, and finally its role as a war prize. There are detail photos of every section for modelers that want to super detail one of the many great kits released for this plane.

Let’s take an in-depth look at some of the chapters to get the reader a sense of the incredible scope and depth of the book. In the Chapter 7, Night Fighters and Trainers, the authors dive into the planned two-seat versions of the Do-335. Covered is the two-seat hump backed version used as a trainer and the second flush cockpit used for night fighting. Also, they cover the heavy armament version in this area with its larger cannons. These are illustrated with period pictures, profile drawings, and cut away drawings of the heavy fighter bomber version. In addition to the great visuals, the writers have interviewed the actual test pilots and people surrounded with the program before their passing, and many quotes and insights are included.

Chapter 10, Do-335-An Overview, has the kind of detail modelers long for in a reference. Multiple photos of the engines and their installation along with instrument panels, wings without their skin, the landing gear, it’s all included. There is also a comprehensive pictorial on the restored D0-335 A-0 located at the National Air and Space Museum. This is full of interesting pictures and information such as…did you know that the bottom fin and rudder had a built-in spring-loaded bumper? You do now and this book has closeup pictures of it.

Lastly, the four appendices cover everything from the pilot’s manual, production aircraft and their disposition when known, profile and top view drawings of the aircraft done by Arthur Bentley, and lastly, a pictorial of Zoukei-Mura’s beautiful Do-335 A-0.

My sincere thanks to Specialty Press for the sample book, to Mr. Creek and Mr. Smith for their efforts to produce such a spectacular reference, and to IPMS for the chance to tell everyone about it.

Were the two engines connected by a drive shaft?

This is arguably the PINNACLE of prop-driven piston engine fighter/bomber design.

First, in response to Richard R. question, no - the engines turned the two props by seperate drive trains (the aft engine drive shaft was something like 3+ meters long).

The Do-335 possessed revolutionary features:

The few 'bugs' encountered in prototypes ('porpoising' @ hi-speed, weak landing gear) were ironed out on the production aircraft - according to pilots it handled VERY well, on par w/ single engine fighters (for an aircraft that weighed almost twice as much loaded as a P-51) !! This aircraft virtually un-catchable by any Allied prop aircraft except maybe late late war P-51 H. Due to massive Allied bombing campaign, increased shortage of Av fuel and shrinkage of German land, destruction of transport facilites only 40 production planes built.

Claude Dornier patented in-line engine placement design in the '30s (an interesting side note - Heinkel Aircraft Co.. built and flew WORLDs 1st jet AND rocket powered aircraft circa 1939 !! - see He-178 and He-176) Thanks for the time for this long post !! I love this aircraft - built a Tamiya 1/48 scale kit in 2012 which has unique camoflage 'design'.

Actually both engines were independent like most two engined planes. They had separate oil and cooliing systems for each engine. They were not connected in any way

What type of airfoil did it use and what were it's specs.