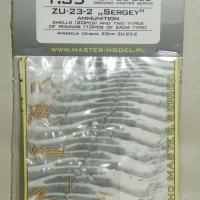 Master Model has produced a nice ammunition set to go along with their beautiful ZU-23-2 barrels. This set consists of 20 empty casings, 10 OFZ (HEI) rounds and 10 BZT (API-T) rounds. The items are made from turned brass and ultra-tiny. The only issue I have with these great items is that they can only be used as a diorama accessory. Without the disintegrating links that hold the rounds together, they can only be used as individual pieces unless the builder is a REALLY good scratch builder.

The OFZ round is a High Explosive Incendiary round. As shown in the picture, it has an aluminum casing, black warhead, and aluminum tip. There is a possibility that the tip is covered with the red incendiary marking (as in NATO ammunition) but this is pure speculation on my part. The BZT round is a Armor Piercing Incendiary Tracer round. This round has a brass casing, black warhead, and what appears to be a red band around the warhead. The ZU-23-2 gun system is license produced in four other countries besides Russia. As the attached pictures attest, there is way more ammunition also produced from these other countries and they do not all fall under the descriptions I gave for the said ammunition. So basically you can pretty much paint it as you see fit. The pictures are just a few that can be found on the internet.

Painting was a pure pain. These rounds are so small! I painted the rounds following the above guidance and attempted to add the brass expansion ring using copper paint to not mesh with the casing color. I wear a #8 optivisor and I could still barely see the engraved lines around the round to paint a straight line. I switched over to my magnifying glass and still did not get much better on the results. As you can see in the finished picture, I need a better magnification system.

This is another really nice set from Master Model! If they had molded some with the links or included them as separate parts (maybe in photo-etch) this set would really assist and give the builder several more options on the implementation for use.

I would like to thank Master Model for releasing and providing this set for review. Also thanks to IPMS/USA for giving me the opportunity to review it. Get this set and use it to make your ZU-23-2 equipped Gun Truck, vehicle, or standalone gun stand out.