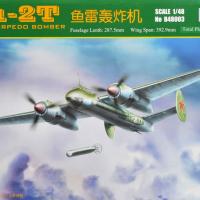 The Tupolev TU-2 was introduced into service in 1942 and produced as several variants to include a high speed bomber, dive-bomber, interceptor, recon and as represented in this review kit, a torpedo bomber. The TU-2T torpedo bomber began it service in early 1945 with overall production of the TU-2 continuing until 1948. Russia retired the TU-2 in 1950 but sold many of them to other nation's air forces. China used the TU-2 until the late 1970’s.

Xuntong Models is new to the modeling scene and they started off with three TU-2 variants as their first releases. Thanks to Stevens International, I was able to have a chance to review one of these fine kits. I cracked open the sturdy box and was pleasantly surprised to find individually bagged sprues and a nice instruction booklet with CAD drawings very clearly labeled with easy to manage steps. The clear sprue appeared to be thin and very clear. Lastly, the decals looked very good and cover six different aircraft options to include Soviet Black Fleet, Soviet Pacific Fleet, Chinese, Polish and Bulgarian Air Forces, as well as a Chinese People’s Volunteer Army. ( The latter was used during the Korean war.)

Construction begins with removing some tabs and drilling a few holes to accommodate various components specific to the TU-2(T) not utilized on the other two TU-2 variants produced by Xuntong. Next, as with most aircraft models, we move into the cockpit and the remainder of the interior and begin adding some of the various interior details. It is here that I notice the a couple of noteworthy aspects of this kit. First, the designers have done a good job of attaching parts to the sprues by attaching to the mating surface of the part as opposed to an exterior detail surface. One negative I found with this kit, is related to the parts detail. The detail is a bit on the soft side lacking that hard clean edge we associate with the top manufacturers in Japan and the Czech Republic. This isn’t a show stopper though. Despite the softish detail Xuntong has managed to mold some tiny levers that are individually added to the pilot's throttle console. The instrument panel has deep recessed instruments that are void of the actual gauges.

After the pilot’s office is complete, as well as the forward and aft gunners positions it is time to close up the fuselage halves. Even though the two halves fit together well the mating surfaces are not planar to each other. Some builders will run a big file across the fuselage halves to square up the surfaces. This is one kit that will benefit by that little trick. I opted to use the thicker testors model cement and "brute force" the halves together.

Here is where the plans would have you install the canopy and other glass parts but I chose to wait until after the wings, tail and engine nacelles were installed before tackling the glass. The upper and lower wing halves were joined together with little problem. The stab and fins presented no problems either. The rudders, elevators and ailerons were added to their respective parts. The fit was not perfect, but just a little sanding made them snug right into place.

Next the nacelles were assembled. Needless to say, I wasn’t looking closely at the instructions and managed to assemble the wrong nacelle halves together, to include filling and finishing the seams. After breaking them apart and joining the parts correctly they were attached to lower wing sections. The fit was decent, but not perfect. Just a bit of sanding and clamping was necessary to get them to fit.

I’m sure you guessed the engines and cowling were next on my agenda. The exhaust parts are very well done and mate up well with the backside of the cylinders with just a bit of assistance. The engines are mounted in a scale-like manner to a set of motor mounts that support the engines in front of the firewall just like they ought to be. My only gripe I have with the kit is with this mounting system. If you plan on displaying the engines without the cowls you are golden. You could easily scratch build some bits and bobs that will give you a great looking exposed engine and firewall. However, if like me, you want to seal them up, you have a bit more work to do. Despite all the great engineering, I think the cowls were the place where the ball was dropped with the kit. The cowl consists of six core parts. Alignment begins with the attachment of the top, aft center part. ( I should note this part is utilized even if the cowl is left off.) This cowl part has no alignment pins, notches, guides or any other way to get it exactly in position. I was semi-lucky and got them both close, but I put I put as much effort into the cowling, to include filling, sanding etc… as I did with the rest of the kit. Ultimately though, by the time you add the leaf shutter to the cowl opening, the ONLY exposed portion are the two exhaust stubs.

The first wing attached without incident. Only a little filler was needed on the lower wing to fuselage joint. The second wing required a bunch of sanding where the upper surface mates to the fuselage. Why this one wing was that far off I’m not sure. Like the other wing, this one required filler on the lower mating surface.

Now back to the canopy pieces. As I stated early in the review they looked very good on the sprues. They were indeed thin and after a coat of future, I masked them in preparation for painting. With the exception of the nose glass all the pieces fit reasonably well right off the sprue. (A little sanding was required, no more than I expect on any kit.) The nose piece took some extra sanding but ultimately it fit just fine.

With the landing gear and props still in my storage bin, I tackled some paint and decals. As per my normal routine, I covered the model in Tamiya primer. It is probably necessary to back up a bit and mention the color call out in the plans as well as the colors depicted on the box. The plans appear to be very thorough with the color chart. My first color question is in reference to the interior color. The plans call out the use of (grey) as opposed to green or blue as I would have expected. I’m not expert in mid- 1940 Tupolev bombers but maybe they used a grey interior color. ??? I’ll leave that to the guys in the forums. The other fault I find is with the four non-Soviet fleet examples. Despite the box clearly depicting four distinct shades of what I would consider an eastern bloc medium green, the plans simply call the final exterior color as matte olive drab for all four examples. I chose to use the Testors enamel medium green as my exterior color on the Bulgarian Air Force machine. I think it looks pretty good.

After a coat of paint, and a clear coat the decals were applied in the normal fashion with Mirco-set and Micro-sol . The decals were thin and clear and adhered to the model very well. In fact, I had a problem getting them to move at all. After the first two, the remainder went down fine and I was able to shift them around a bit easier. Given the soft panel lines the decals started to settle in without the Micro-sol. After the Micro-sol, the decals snuggled in just fine. The props gear and gear doors were added at this time. I should note the tires had raised tread detail and I don’t recall seeing that before in a kit. The final clear coat followed by a dull coat gives me the pleasure of calling this build done.

I’ve given some thought to how to summarize this kit. Here is what I decided on… If Xuntong had marketed a more produced model (say a 109, P-51 or P-47) I would have been disappointed with the quality of the kit. I would go buy a kit from another manufacturer. However, since the TU-2 is a pretty rare beast in the modeling world, I think Xuntong did a fine job. In fact they did a much better job than most short-run / limited-run kit makers do, but not quite on par with the typical quality of the top 2 or 3 manufacturers. Despite their soft molding, overall their design / engineering was very well done. At the time of the writing of this review, I’m aware Xuntong are planning the release of a the DB-3 / IL-4 as their next model kit. I think they have chosen well. It should make another fine kit for the stash.

My thanks to Stevens International, Xuntong models and IPMS USA for the chance to review this kit.