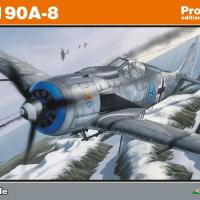 The Focke Wulf FW-190 series of fighters served as one of the two major single engine fighters used by the Luftwaffe during World War II. Introduced after the Messerschmitt Bf-109 fighter, the FW-190A powered by a radial engine was in many ways a better fighter, although it was inferior in performance to the Messerschmitt at high altitudes, a disadvantage solved by the introduction of the Jumo powered FW-190D later in the war. The radial engine FW-190 became standard not only in fighter units, but also in close support units, especially on the Eastern Front. It was more heavily armed and armored, and its wide track undercarriage made it easier to fly, cutting the accident rate dramatically, compared to the Bf-109.

The more heavily armed FW-190A-8 and FW-190F-8 fighters were produced in the greatest numbers, and these are readily identified by the cowling bulges ahead of the windshield, which covered the mechanism of the 13 mm. MG0-131 machine guns used on this variant.

Readers interested in World War II aviation should be thoroughly familiar with the career of the FW-190 series, so it is not necessary to go into detail here. It was a classic fighter, and several are still flying today. In addition, a number of flying replicas also exist, which are essentially copies of the production aircraft. The accompanying photo of a recently restored FW-190A-8 was taken last year in Arizona.

There is probably more information available on the FW-190 than any other Luftwaffe fighter.

The old “Profile” publications aren’t much help any more, but the Squadron Signal “In Action” series has two very useful paperbacks, and the French “Planes and Pilots” book gives a lot of information. The Osprey ‘Aircraft of the Aces” series provides much information, and there are several publications devoted entirely to the development and use of the Fw-190. In addition, there is a lot of on-line material available. The Squadron “Walk Around” book is essential if you are superdetailing, and there are all kind of decal sheets available if you are not satisfied with those provided in the kit. However, work from photographs if you can.

The new Eduard issue kit includes a very detailed set of instructions, which include a one page historical summary, a sprue diagram which includes about 30 extra parts which are to be used on earlier or later variants, a PE diagram, a color chart which includes “aqueous” and “Mr. Color” shades along with the designations of the official Luftwaffe RLM colors, and a mask diagram.

The 16 page instructions also include 8 pages of very detailed assembly drawings, and four view color drawings of 5 aircraft for which decals are included. These include the following:

Decals are provided for all five aircraft listed above. These are quite thin but fairly robust. After initial painting, I gave the model a coat of Glosscote, and then applied all of the decals. After another thin coat of Glosscote, I sprayed the model with Dullcote. The decals looked great.

The kit consists of two sprues of grey styrene, one clear sprue, one PE sheet, and one mask for the canopy. There are 87 parts, including 5 clear components, and there are enough parts to do any of the major variants of the FW-190, including the FW-190A-5 through FW-190A-9. Of course, these parts can be used to convert other kits, notable Hasegawa and Airfix, into other variants, so keep the spares in a labeled plastic bag for future use.

The parts can be easily removed from the sprues with a sharp knife, although a pair of clippers could also be useful. The cockpit interior is very detailed, and although there is aftermarket material available, the kit interior is perfectly adequate. The PE parts are nicely done and easy to install.

Assembling the fuselage is rather complicated, but the results are worth it. The aft portion of the fuselage should be joined first, followed by the cockpit interior unit, which is a small model in itself. It fits on interior ridges, although the aftermarket units requires some interior trimming. The engine mounts securely into the front position, while the aftermarket engine rear unit also goes into place easily. The three exhaust stack units fit in place positively, and the only difference between the kit units and the Brassin units is that the Brassin exhausts are drilled out. There are problems with the aftermarket firewall unit, although the part provided in the kit fits perfectly. More on this in the Brassin reviews.

The wings come in three parts, with a main spar attached to the lower section. The instructions are clear, and the small add-ons make the entire unit very realistic. Be sure to drill out the mounting holes if you intend to mount the bomb or fuel tank rack inter the fuselage. The wing is a fairly complicated structure, so make sure you have all the parts installed before attaching the upper wing sections. The interior parts should be painted RLM 02.

The fuselage unit attaches to the wing quite well, and little if any filler is needed. Somehow, when attached, the wing has the proper dihedral angle, and the stabilizer/elevator units snap into place easily. Just make sure they are straight. Then mount the windshield and mask it off. Mask the wheel wells and you’re ready to go.

My suggestion would be to mask off the holes and paint the airframe before attempting to add any more details. Select the model you wish to make, and do whatever painting is necessary. It will be necessary, of course, to decide on the aircraft you wish to model, since some of the aircraft have racks for bombs and fuel tanks.

After basic painting, assemble the landing gear struts and doors, and attach them to the wheel wells. There isn’t much to attach them to, and the fit is a bit fiddly, but with a little trimming on the gear covers, it can be done. Remember that the FW-190 gear slants forward and inward, so be sure to use a good three view drawing. These are provided on pages 7 and 8 in the instructions. Also, trim and attach the tailwheel unit. This fits into a notch inside of the rear fuselage.

The engine unit, which should be securely attached in the forward section of the cowling, should be painted RLM 66 with silver pushrod housings. It will be slightly visible once the prop and fan are installed. The two small rings of the forward cowling section should be installed before the forward engine crankcase section, as the prop and fan unit attach to that part, allowing the prop to turn freely. Otherwise, you’ll have to glue the prop unit in afterwards, where it will be stationary.

Once painting is complete and all parts are installed, apply the decals in their proper positions. The instructions give excellent details on the particular aircraft, and an extra stencil diagram is provided so you know where to place the small maintenance labels and fuel tank triangles.

Since I like colorful models, I decides to do Choice E, the FW-190A-8 of 1/JG11. However, the instructions on this version are a bit unclear, as it is listed as a “reconstruction” of an aircraft found at Darmstadt at the end of the war. In all of my resources, I found a few references and drawings of aircraft attached to 1/JG11, but unfortunately, all were in the earlier standard 74/75/76 scheme. I could find no reference or photo of this particular aircraft. All the others had the yellow Reich defense band, but none was painted in the colors given in the instructions. To add to the confusion, the colors given in the four-view show what purports to be an 81/82/76 scheme, but the caption at the top says that the scheme is RML 81/84/84. Now RML 81 is a greenish color, not the brown shown in the drawing, so I decided to go with an 81/82/76 scheme using Model Master colors, which are very close to those given in the Luftwaffe Color Schemes books I have. This basically amounts to a two tone green upper pattern with standard RLM 76 below. It is still a colorful model, and probably more accurate than that depicted in the instructions.

The decals were very good to work with, and required no serious trimming. The edges aren’t visible, and no decal setting solution was required. Best of all, there are lots of extras for the spares box. Even the swastikas are included.

Along with the review kit, I received four sets of Eduard Brassin aftermarket details. These will be reviewed separately. I used the Exhaust Stacks (672 085), and Wheels (672 080) straight from the envelope, only trimming the sprue joins. The FW-190A-8 Cockpit 9670 081 consisted of 8 resin pieces, a PE sheet, and a small film piece for the gunsight. These provide a little more detail than the kit’s excellent interior, and the unit fits into the fuselage with some effort to trim and locate it in place. However, the FW-190A-8 MG131 Engine Mount (672 084) is another story. This consists of a resin engine back section, a new firewall, an MG-131 cowling cover, two ammunition containers, an engine mount, two MG-181 machine guns, one tubular part of unknown function, and a part of the engine mounting that attaches to the rear of the engine. I used this unit, but found that the firewall was a little too wide, resulting in poor fit ahead of the cockpit. I ended up scratchbuilding the engine mounting struts and doing a bit of improvising, but the overall effect is pretty good, and the cowling cover can be left open, exposing the details. More on this in the individual reviews.

Having built most of the available kits of the FW-190 in the one true scale over the years, I have to admit that the Eduard kit is probably the best one we’ve had to date. It is accurate, easy to assemble, easy to detail, and the end result is an excellent model of any of the major variants of this famous fighter. Except for the Brassin engine mount unit, the extramarket parts are very well done and easy to use. The kit obviously has some development potential, and some of the extra parts can be used on other kits. For example, I sometimes build several kits in parallel, and in this case, I did a Hasegawa and Matchbox FW-190, using some of the Eduard parts not used on this model. The Eduard kit cockpit interior worked well on the Hasegawa kit, and the Hasegawa cockpit interior certainly added to the old Matchbox kit. The Eduard kit is certainly a little gem. Don’t miss out on this one. Very highly recommended.

Thanks to Dave Morrissette and Eduard for giving me the chance to enjoy building this one.