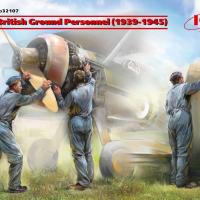 It wasn’t so long ago that 1/32nd aircraft modelers were pretty hard pressed to find pilot or ground crew figures for dioramas they wished to make. ICM has rather single-handedly addressed this issue, and has been busy churning out wonderful sets to complement your 1/32nd scale aircraft collection. One of the latest of these is their WWII British Ground Personnel set.

This simple set consists of three ground crew figures, who seem to be specifically tailored to their excellent Gloster Gladiator aircraft kits. One is ostensibly removing the tail locks and testing the rudder, another is working on the engine and a third is preparing to prep the propeller. All three are useful additions to a good diorama, although obviously not all at once.

The figures couldn’t be simpler, each consisting of legs, torso, arms and head (one with separate cap) along with a tiny tie-back bow for each. Because of their simplicity, it appears that some swapping of parts would be a relatively easy proposition for the sake of variety. Assembly is, of course, equally simple, with just a bit of putty to blend the overalls together effectively.

The poses as presented are quite good, and fit the Gladiator models perfectly. However, if I were making these strictly for myself, I would replace the heads, as the molded features are not particularly distinctive, unlike some of their other sets. On the other hand, by the very nature of the poses you won’t be seeing much of any of their faces if properly placed.

Painting is a very straight-forward process as you’ll be using a pretty limited palette. This doesn’t mean that you can’t have some fun with the shading and so on, as the drapery of the figures is really first-rate. My only real niggle is with the engine mechanic, as it would have been nice if they’d included a tool box, although this is readily obtained from other sources.

All in all, this is a really nice set of figures which can be used to enhance any British aircraft diorama. They are simple to build and to paint and can be modified with only a bit of work. Once again, ICM is helping modelers broaden their horizons without breaking the bank.

My hats off to ICM for continuing this wonderful line of figures and to IPMS/USA for the chance to add these to my Gladiators. Simply wonderful! Keep modeling, friends, and stay safe out there.

At work
Previous Next