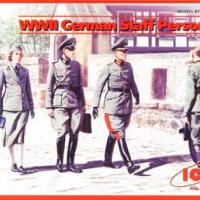 Upon opening the box, you are greeted by the sight of one tan plastic sprue with 29 flash free parts. Past experience with ICM kits has shown them to be rather basic, compared to, say, Dragon figures, but that is not the case here. There is excellent facial and hand detail, and very fine seam details on the uniforms. These are nice figures, representing a German General, his aide, a female staff assistant, and enlisted man driver.

The General is a Generalmajor, equivalent to our one-star Brigadier General. He wears a pre-war tunic with slash lower pockets, a style of uniform no longer issued, but generals, who have a certain amount of leeway in their dress, often wore them as a sign of long service. The general has the Knight’s Cross of the Iron Cross worn at his throat, the Iron Cross First Class on his left pocket, and the ribbon to the Iron Cross 2nd Class is worn in the second buttonhole of his tunic. He is also a World War I veteran – above his Iron Cross 1st Class is the 1939 Clasp to the 1914 Iron Cross. This is a small silver bar to signify the wearer had won the Iron Cross during the First World War, and when he was awarded the Iron Cross during the Second World War, rather than get another medal, he received the clasp. He also has a Wound Badge next to the Iron Cross 1st Class, signifying he had been wounded in combat.

The aide carrying the briefcase is a Kapitan with an Infantry Assault Badge on his left pocket. He also has the ribbon to the Iron Cross 2nd Class in the buttonhole of his tunic, and an Iron Cross 1st Class on his left breast pocket. He has another award on his left pocket which I cannot make out, but it could be a German Sports Badge, given for proficiency in athletics. The captain wears aiguillettes on his right shoulder, signifying he is an adjutant.

The female figure is a member of the Stabshelferinnen, or staff assistants. These were German civilian women volunteers who served with the army as communications specialists and secretarial personnel. They were not to be involved in military operations; however, during the course of the war, many of these women were put in harm’s way.  She wears the standard uniform of jacket, skirt, and cap over a white shirt with tie. Her only accessory is the small black leather handbag.

The last figure is the enlisted driver in basic wool tunic and trousers, jackboots, and field cap. He stands at attention as he holds the car door open. He has no awards or gear of any kind.

Time to start gluing – once cut from the sprue, the parts need a little sanding to remove the seams. There are no surprises here, fit is excellent, so no assembly issues. I usually use tube glue on figures because of its filling capabilities; however, liquid cement will work just fine here. I left the caps off the general and captain so I could more easily paint their faces, and I did not glue the arm with the briefcase on the captain yet. The briefcase is molded to his hand and arm, making a perfect join, and I just wanted to be able to paint the case better. I left the female’s legs off and put a drill up through her skirt into her torso (don’t worry, she’s only plastic and didn’t feel a thing). I usually hold the figures by the boots when I paint them, and she only has low shoes. After everyone was assembled, I gave them all a shot of Testors White Primer. Sure enough, I found a couple seams I had missed, and once these were taken care of, it was time to start laying paint on our team.

I start with the faces and hands; for years, I have been using Testors Light Tan, #1170, for my base color. It is slightly darker, perfect for soldiers who are in the sun and dirt all day. For my staff, however, I want to lighten up the base color for the female and General, so I use some white mixed with the flesh color for my base coat, while the Captain and driver get skin tones of the Light Tan. I then mixed a little black with the base color and hit the shadow areas: behind the ears, under the nose, eye sockets, between the fingers, and along the cuff and collar. Then I mixed a little dark brown for the mouth and just a fine line for the eyes – in this scale it is not advised to paint in the whites of the eyes.

For the flesh highlights, I added white to the base color and painted the bridge of the nose, chin, upper lip, fingers, forehead, and upper cheeks. I mixed a little red with this color and painted the lower lips and a soft rosy cheek for our female. Then I gently blended any harsh lines with a brush with a dab of mineral spirits.

For the uniforms which are all field gray, a gray/green color used by the German forces throughout WW II, I generally use black, white, and either Testors 1164 Flat Green or 1165 Flat Olive. Using these four colors, I can replicate almost any shade of field gray. For the general, I used the olive drab sparingly, to make a grayer shade. For the captain, I used the green color to create a lighter, greener shade. Officers privately purchased their uniforms and there was a wide range of colors. Stabshelferinnen uniforms were on the grayer side, so very little olive was used here. The enlisted driver would wear an issue uniform, which was darker and with an olive shade to it. I gave him a cap of a similar color. The officer’s riding breeches would be gray, the general’s made from black and white, while the captain’s breeches had a touch of wood tan to them to make them more of a stone gray color.

Once the base coat is down, I went back and added shading,by adding black to the base coat. I outlined the pockets, seams, along the French cuffs on the officers, buttons, creases, collars, and shoulder boards, etc. Highlights were added with white or a touch of wood tan added to the base color. It’s necessary to hit the high points, such as the pleats on the pockets, edge of cuff, knees, shoulders, high points of creases, and so on.

At this point, it’s time to start painting details on the uniforms, which would include insignia. I recently purchased a sheet of Alliance Model Works Decals for 1/35th German Army figures, so I would use this for as many of the insignia as possible.

Details for the general include wide red stripes on his trousers and piping on the front of his tunic. A fine gray seam runs down the middle of his stripes on his leg. His WW I Iron Cross ribbon in the 2nd buttonhole is black on the edges, then white and a black stripe down the middle. The general has two Iron Cross medals; I started out by painting them black, then carefully added the edges in white. I gave the general a black wound badge next to his Iron Cross. He also has a row of ribbons over his left pocket; these can be for long service or World War I Cross of Honor, etc. In this scale it would be very difficult to try and paint individual ribbons, so I just added an assortment of colors – blue, white, red, black, and yellow. Next came the collar, which was a dark green, almost black. Generals usually wore brown leather belts, another symbol of long service. The general does not have a pistol, but most German officers wore one, so I may go back and add one later from my spares box. If you do, make it a small one, such as a PPK. Finally, I finished up the general with gold buttons and belt buckle.

The captain also has a dark green collar, and an Iron Cross. I painted his belt and holster black, with a silver buckle. His Infantry badge is silver and white, and his sports badge is gold. I plan to use a decal for his Iron Cross ribbon. The captain’s buttons are white.

I also painted details on the two officer’s caps at this point. The lower part of the cap is the same dark green as the collars, with white cords for the captain and gold for the general. Visors are black with tan underneath. I would glue the caps on and paint the cloth tops later, and use decals for the eagles and wreath insignias.

The driver has only a black leather belt with aluminum buckle, and light gray buttons. On his cap is a white inverted vee to represent infantry piping.

The female figure has rank insignia molded on the collar, but in studying photos, I found few examples of any collar insignia at all, so I scraped it off before painting and planned to leave the collar bare and make her an enlisted rank. Most of these women had some communications training and wore a lightning bolt insignia on their upper left sleeve (this earned them the nickname “blitz girls”). This insignia was also worn on the tie as an enameled pin, and a small version could be seen on the left side of the cap. I painted these insignias on, with varying success. A cuffband with “Stabshelferinnen” on it was worn on the left lower sleeve. The Osprey book Women at War shows a gray band with green lettering.

At this point, most of the painting was done, except for the boots and details on the caps. Now it was time for decals. Alliance Model Works has released several sets of decals in 1/35th and 1/16th for German and US figures. The German sets include photo-etch sheets with medals and awards, and shoulder boards. I just used decals for this review. On the female figure, I used a breast eagle and cap eagle insignia. For the three male figures, I used appropriate breast eagles, cap eagles, collar patches, and shoulder boards. The driver got a cockade insignia in the inverted vee of piping on his cap, plus a corporal’s stripe on his left sleeve. The captain received a tri-color Iron Cross ribbon on his buttonhole, and he had an oak leave wreath placed on his cap below the eagle. All decals needed setting solution. Some of the decals did not stand out. The general’s breast eagle was barely perceptible, so I painted some gold over it to make it more noticeable. I also painted the general’s cap eagle and oak wreath on his cap in gold. In my opinion, the eagle decals do not show up well on officer’s uniforms, while the more subdued enlisted eagles are fine and look realistic.

After the decals had set, I sprayed the figures with Testors Clear Flat from a rattle can. I used some Gloss Coat for details like the visors on the officer’s caps.  I am pleased with the way these came out; they all look good and are in natural poses. With all the 1/35th military car models being produced lately, these will go well with any of these vehicles.

Thanks to Squadron Mail Order and IPMS/USA for the review kit.