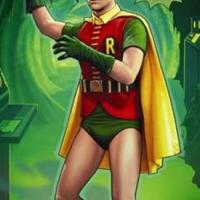 In the Batman universe, Robin, the Boy Wonder, certainly has to qualify as iconic a character as anything. His colorful costume, colorful language (Holy banana peels!) and colorful body language all contributed to the fun. Adding this rendition to my Batman collection has been a real pleasure.

Moebius Models chose to mold this kit in bright yellow plastic, which may seem a bit odd to some. After all, the only really yellow part of Robin’s costume is his cape. However, I think they were acknowledging a simple truth here – yellow is the one of the hardest colors to paint, as it normally doesn’t cover very well. All in all, I think they made a logical choice. In any case I didn’t find it a hardship when it got to painting.

One of the things I really like about the Moebius range of Batman figures is the care that’s been taken to make them relatively easy to paint. As in the kits before, this kit has been thought out in some detail, and if you’re not comfortable painting figures, you’ll find that most colors can be painted as separate subassemblies. Having done a few figures in my time, I elected to assemble the kit completely minus only the head and cape.

You do have some choices to make, however, during assembly. Moebius gives you a range of options regarding the pose, with several hands and arms to create Robin either throwing a Batarang, spreading his arms for an attack, or punching a fist into an open palm – one of Burt Ward’s favorite gestures.

Although the Batarang pose featured on the box was nice, I wasn’t thrilled with it. Anatomically, it was a little off as such a posture would normally raise the right shoulder a bit more than the kit offered. In addition, I already had Batman handling a Batarang so having both doing it would have been a bit redundant. The “battle ready” spread hands didn’t look quite right either, as the arms as molded were held too closely to the body. In the end, I elected for the “fist in palm” pose as most iconic, but once again, as the kit was designed the arms were too close to the torso. Burt usually held his arms out a bit when he made this aggressive gesture.

I decided to use a little bit of artistic license to make this more to my liking. Sawing off the left shoulder, I angled this forward a tad to permit the arms to be angled out from the torso. The final result looks pretty good to me.

As to painting, I must confess that there’s no way around it on such a colorful costume – you’re going to have to do some hand work eventually. I chose as a primer base the color of Robin’s tights – which in actuality were more of a body stocking, as they covered not only his legs but his arms as well. This color served as a good base for all the other colors I needed to paint, and would be distinctive enough that there would be a bit of tone difference between his head and face and his arms and legs – enough, I hoped, to make the body stocking a bit more obvious.

I painted the head and cape separately. The face looked a bit odd to me at first, as they had designed it fit under the mask, hence no eyebrows and not much forehead. However, after painting it and applying the separate mask, I was really pleased with how it came out. Moebius had done it again!

I also modified the neck a wee bit to permit him to be turning his head slightly to the left. Having checked with my previously-built Batman figure, this would have Robin looking towards his caped companion, which is what I wanted.

To create a satin-like appearance on his gloves and briefs I drybrushed a bit of metallic green over the base green. The effect is a bit overdone, but I like the contrast notwithstanding.

All, in all, Moebius has done a wonderful job of capturing Bruce Ward as Robin, with a choice of poses that should please most everyone. To be honest, I was rather dreading doing this figure as I knew the colorful costume would be something of a challenge. However, the design of the kit was a real help in dealing with this, and I’m more than a little pleased with the final result. Robin looks great either by himself or with my growing family of Batman figures. I can recommend this kit for Batman lovers everywhere. You won’t be disappointed.

My thanks to Moebius Models for making such a terrific kit and to IPMS/USA for giving me a chance to add it to my collection.