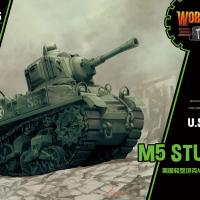 For me this kit seems like a match made in heaven. I have always liked the Stuart tank as well as have been looking to trying building one of the toon tanks from Meng. When the opportunity arose to do this review, I jumped on it. I was intrigued after Meng had released several Meng Kids aircraft kits and now, they have released at the time of this review 12 World War Toons tank kits. I also discovered while researching the kit for this review there is apparently video game utilizing the tanks in the series. At the time of this review the game is apparently in beta form.

Now, on to the kit itself. There are approximately 60 parts on two sprues with pair of rubber band tracks. The tracks are molded in a loop so it isn’t even necessary to join them together. Assembly is broken up over 10 easy steps and for an advanced modeler figure 2 or 3 hours to complete assembly. The fit of the parts is very good and in the case of my build, I left off the pioneer tools and all the running gear just to facilitate painting. The kit is NOT a snap together kit, but many of the parts fit so well gluing isn’t necessary. After assembly and painting a placed the tracks on the model and added a bit of weathering powder to dirty the model up a bit.

For those of you who are looking for a little diversion from their normal model building, this kit is for you. Where I think this kit will really shines is the possibility of introducing a new modeler to their first or second model. Most of the parts are large enough for small hands and the fit as I mentioned is very good. You also can’t beat the price point for this kit. Over time you should be able to collect them all. J

I would really like to extend my thanks to Meng Models for making this kit available for review as well as to the IPMS USA review team for giving me the opportunity to review the kit.