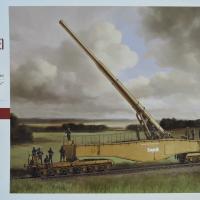 Hitler's fascination with massive armaments is epitomized by Germany's heavy investment in railway guns. "Leopold", one of 25 K5 railway guns made by Krupp for World War II, was a behemoth of a gun. It weighed 240 short tons, fired 560 lb/eleven inch shells, and had to be moved and aimed on specially designed railroad tracks. Once emplaced, the Leopold could fire shells up to forty miles. This limited edition kit features three sets of decals and figures.

This is a rebox of a kit originally issued in the 1970’s, issued again with figures added. Despite being that old, it’s in relatively good shape and makes an impressive model. The kit comes on five light gray sprues plus 2 sprues for the figures. The sprues have very small part numbers that are hard to read. The kit also includes a small decal sheet, short length of black vinyl tubing, and instructions. The sprues are gathered together in three plastic bags and some of the parts had broken off the sprues. The chassis for the gun is a one piece molding packed loose in the box. The chassis does have some minor flash. The barrel comes in two halves a little over 11 inches long, and has a fair amount of flash on the edges.

The front and rear bogeys are assembled in steps one through nine. There are lots of flash and mold seams on the parts that need to be cleaned up, but everything goes together well.

The ammunition freight car and transporter assembly is assembled in steps 10 through 15. The body for the ammunition freight car has some flash but otherwise is a nicely molded piece. The part number, B 71, is molded in the bottom of the freight car along with some massive pour blocks that will be visible in the completed kit. The mufflers for the freight car also have some recessed ejection marks on the outside of the muffler that will need to be filled. A cable is not provided to suspend the artillery shell from the crane so one will need to be provided separately.

The gun barrel is molded in to halves with a one-piece muzzle end. The barrel was nice and straight without warpage, but will require puttying and sanding of the joints.

Steps 24 through 28 install bulkheads inside the railcar body and the upper deck. For whatever reason Hasegawa molds the upper deck in one piece that needs to be cut into sections for installation. Gluing the top deck pieces down required some clamps to get it to sit flush with the body side.

Hasegawa provides a section of rail bed, which is a nice base for the completed model. The railway car wheels and axles appear too narrow for the tract section however.

There are 24 figures provided on two sprues, so there is a duplicate of each figure. The figures have good detail but quite a bit of flash which will need to be cleaned up for the best looking model. The instructions refer to the box art for placement of the figures and I was able to locate all 24 in a reasonable position. The numerous figures add considerable detail and human scale to the railway gun.

Three marking options are provided: dark yellow, German gray, and three-color camouflage. Decals are provided for two of the Anzio Annie guns, Leopold and Robert. The decals are fairly thin, have crisp detail, and lay down nicely.

This is a nice kit that goes together well and provides a nice model of the railway gun, at a scale that doesn’t require taking over the entire workbench. There is quite a bit of cleanup required due to the flash on the edges of the parts.

Thanks to Hasegawa and Hobbico for providing the review sample, and to IPMS who allowed me to do this review.