The Wildcat in World War II 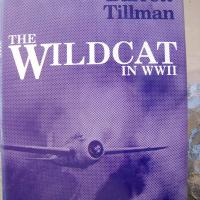 During the last part of the nineteen thirties, the U.S. Navy was in the process of replacing its biplanes with higher performing monoplanes.  The Curtiss SBC “Helldiver” dive bomber was being replaced by the Vought Sikorsky SB2U “Vindicator”, and the Martin T4M’s were being replaced by the Douglas TBD-1 “Devastator” monoplanes.  Grumman’s last biplane, the F3F-2, was just entering service when the decision was made to equip Navy fighter squadrons with monoplanes. The first monoplane, the Brewster F2A-1, later known as the Buffalo, was entering service when Grumman’s biplane competitor, the F4F-1, was redesigned, becoming the XF4F-2 Wildcat monoplane.  The F4F-2 proved to be a much better airplane, and the production model, the F4F-3, was produced in quantity, with the F2A-1 taking a back seat, although quite a few were issued to Marine Corps units.   During the early part of the war F2A’s were used in combat against the Japanese, but they were no match against the Mitsubishi A6M-2 Zero fighters which were now being used by the Japanese Navy.

The Wildcat in World War II author, Barrett Tillman, is a specialist in the history of Naval Aviation, having written several books on the history of such aircraft as the Douglas SBD, the Grumman F6F Hellcat, and the Vought F8 Crusader, not to mention many articles on the subject of naval aviation.  He is a pilot, and an interesting person to talk to.  I met him at an IPMS convention in Phoenix a few years ago, and actually that was when I acquired a copy of his book on the Wildcat.  Tillman had contact with many of the main characters in the book, and in fact my copy of the book was personally signed by Maj. Joseph Foss USMC, the Marine Corps leading Wildcat ace with 26 victories.  Tillman’s background was very useful, as it is refreshing to read a book on aviation history written by a pilot who understands what is going on when an airplane leaves the ground.  When a writer doesn’t have this background, this becomes very obvious to those of us who fly.

The Wildcat has an interesting developmental history, with such issues as powerplant, armor protection, armament, airframe weight, and wing folding becoming important as the airplane was developed.  In addition, when comparing it with the enemy’s competition, the Zero,  the Wildcat had certain advantages and disadvantages that were usually compensated for by pilot training.  The Zero had much less power and had no armor plate protecting the pilot or vital components, giving it much better performance in turns and climbs, whereas the Wildcat was much heavier, more powerful, and less maneuverable. It also was inferior in rate of climb so pilots developed tactics that overcame these disadvantages. Navy pilots were able to use the airplane successfully against the Japanese, and part of this was because American pilots were being trained more efficiently, whereas the Japanese were losing aircrews and they were not able to train enough replacement pilots to even the score.   Later, the airplane became even heavier when folding wings were added in the F4F-4 version.  Once the wildcat had become the Navy’s standard shipboard fighter, its successor, the F6F Hellcat, was under development, solving most of the performance problems associated with the F4F.  At that point, the Navy directed Grumman to shift its major production facilities to the F6F, meanwhile keeping the F4F in production by General Motors as the FM-1.  Upgrading of this design resulted in the FM-2, which served the Navy’s carrier forces until the end of the war, although they were mostly used on escort carriers, and not in the aerial superiority role.

The book contains ten chapters, outlining the development of the F4F and its subsequent career.  The F4F made its mark at the battles of Coral Sea and Midway, and later as a land based fighter at Guadalcanal and the Eastern Solomons.  As Corsairs and Hellcats were added to the Navy’s inventory, Wildcats took on a secondary role, usually flying from escort carriers in close support of landing operations or in an anti-submarine role.  A number were exported, mainly to Britain,  where they were used effectively by the Royal Navy.  The Marines produced the highest scoring aces, but as time went on, most Navy pilots in first line combat were flying more modern fighters. The book lists the scores of the aces, and also provides an accurate account of the variants of the Wildcat that were produced.

There is even a short account of the postwar career of the Wildcat, as most were removed from service immediately after the end of the war.  Most, unfortunately, were scrapped, although I can recall seeing war-surplus Wildcats in the early fifties. This part of the aircraft’s history is not mentioned in the book.  I also recall photographing several FM-2’s being used as agricultural sprayers in the Phoenix area in the late fifties, and these are not mentioned either and few people seem to know anything about them.

By the way, most sources state that only F4F-4’s and FM-2’s survived with some still being flown, but I saw an F4F-3 at the Oshkosh fly-in in July of 2021.  So maybe at least one survived. It looked great!

I have had this book for at least fifteen years, and have found it fascinating reading and very useful in my modeling.  It is well written and well illustrated.  I would certainly highly recommend it to anyone interested in the development and service use of the Grumman Wildcat.  I’m sure that the book is available on line. Get one while you can.