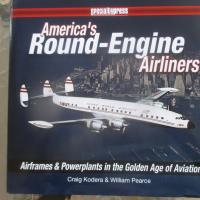 This book is an account of the development of the American airliner powered by reciprocating engines, up to their replacement by jet powered aircraft in the 1960’s. The authors are well qualified to trace the advances in both airframes and powerplants. Craig Kodera has a completely aeronautical background, having experience as both an airline and Air Force pilot, and as an excellent aviation artist. William Pearce’s background is in aviation powerplants, and between them, they are able to trace the technical developments and the developmental histories of each major aircraft and powerplant.

The main objective of the writers is to trace the developments in airline equipment, explaining what happened and why it happened. This is NOT a book that illustrates every airline or even every type of airline operation, but rather it covers the major development of Curtiss-Wright, Boeing, Douglas, Lockheed, and Martin airliners, along with Wright, Lycoming, and Pratt & Whitney engines. It also covers mainly the first-line, long distance passenger airline operations, not small feeder lines between relatively close cities. Therefore, a reader interested in learning why things developed the way they did will come out much more knowledgeable in the field of aviation history. I’ve studied aviation history all my life, as well as having flown many types of airplanes (unfortunately not airline equipment), and I can certainly say that I now have a much better understanding of what went on and why.

The authors begin with engine development, and why liquid cooled in-line engines gave way to air cooled radials back in the 1920’s, and why and how aircraft with wooden structures were replaced by all metal types. Such topics as the emergence of flying boats in the late thirties, and why they eventually gave way to land based types after World War II, are covered very well. The developments caused by World War II show how the airline industry changed from one in which only the wealthy could afford to fly to the postwar situation where the costs were reduced and the time between stops was cut drastically due to improvements in powerplants and aerodynamics.

Postwar, the release of many surplus transport aircraft by the military, notably Douglas C-54’s, allowed the major carriers to begin expanding their services, and as time went on, both Douglas and Lockheed, the major competitors, constantly improved their “DC” and “Constellation” types to meet competition. Boeing, Convair, and Martin, the other producers, also developed special purpose airliners, and these are covered also. One area not mentioned was the development of the non-scheduled and cargo operations that expanded dramatically after the war, mainly using war-surplus C-47’s, C-54’s, and C-46’s, but this is another topic for another book. Also, very little is said about the use of the Lockheed Model 18 “Lodestar”, a few of which were used by various airlines postwar. I flew in a National Airlines Lodestar back in 1954, one of the best airline rides I can remember, and fortunately, I made some good photos of these planes during that time period.

One really excellent feature of this book is the large number of period photographs of the aircraft, including interior views and photos showing the aircraft on the ground being serviced. Color photos during the late thirties were rare, and there are some excellent shots of American Airlines DC-3’s that look like they were taken yesterday. I remember those as a kid, and they were indeed very colorful. There are over 400 photos and diagrams in the book, and they are all of excellent quality.

The sections on engine development are very detailed, explaining the developments and how the engines changed over the years. Numerous illustrations, both photographs and drawings from period technical manuals, illustrate how complicated these engines became. Other illustrations show advertising pictures used to develop customer response.

This is one of those books that is necessary to have if you want to have a complete aviation library. It has only minimum, value as a modeling reference, as that was not the objective of the authors, but as background material, it is outstanding. I would certainly recommend it even to modelers, as it helps to make the whole scene come alive, and presents the information in a way that even non-technical readers can understand it. Don’t miss out on this one.

Thanks to John Noack, Phil Petersen, and Specialty Press for the review copy. I will always treasure it.