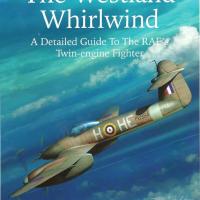 Valiant Wings Publishing’s editor, Richard A. Franks, and in this case the author of The Westland Whirlwind, has recollections of making models at the age of eight. The first aircraft Richard ever built was an Airfix blister-pack 1/72nd Fokker Dr.I Made in an afternoon, resplendent in 'Post Office Red' and with the decals applied whilst the paint was still wet so that there were lots of fingerprints! While working in the real world, Richard started to submit work for publication in magazines which led Richard to working for such titles as Model Art International, Scale Models, Scale Aircraft Modelling, In Scale, and Scale Aviation Modeller magazines. Richard became the title of editor of the latter in 1995 and continued with that title for the next decade, before leaving it to take the reins of Model Airplane International from its launch in early 2005. Valiant grew much quicker than originally anticipated, resulting in Richard A. Franks dedicating his talents to Valiant Wings in 2014.

Illustrator and author, Richard J. Caruana’s first aviation illustrations were published in 1970 by Ermanno Albertelli of Parma, Italy. These were soon followed by a 15-volume history of the Italian Air Force during WWII published by Edizioni Bizzarri of Rome commissioned by the Italian Air Force. ‘Air International' was the first UK publication to publish Richard’s work in 1976, followed by 'Air Enthusiast' and 'Aviation News'. Between 1984 and 1991 Richard set up and managed Modelaid International Publications, which for ten years produced a specialized aviation monthly magazine,'Modelaid International' (later Air Forces International). Richard’s color illustrations have been featured in many other magazines and book titles.

Valiant Wings second edition of Airframe Album number four sees an added glossy fourteen pages added to this new release from the first edition that appeared in 2014. The front cover features a color illustration by Arkadiusz Wrobel that makes this second edition easy to spot as it differs from the first edition’s cover. The in-flight Westland Whirlwind F Mk. I represents P6984 (HE – H) assigned to the No. 263 Fighter Squadron on December 22, 1940. She didn’t last long, as she was written off on January 29, 1941. Richard Caruana delivers the rear cover with the color top and bottom views of Westland Whirlwind Mk. I P6974 (HE – Z). Serving with No. 263 Squadron, she is marked with white bands and a white nose for ‘Operation Starkey’. A side profile can be found on page 73.

I counted 72 color pictures and 278 black and white drawings and photographs. There are also thirty color illustrations plus scrap views by Richard J. Caruana of Whirlwind side, top, and bottom views. Richard also serves up seventeen of the 1/48th scale line drawings at the back of this monograph. Wojciech Sankowski contributes fifteen isometric views of all of the prototype and production airframes.

Richard A. Franks kicks off with a seven page introduction that addresses the original F.37/35 Air Ministry request for a single seat day/night fighter. Development and operational deployment for the Whirlwind’s short career are also addressed. Although much of the blame for the Whirlwind’s short career was blamed on the Peregrine engines, they were not worse than the Whirlwind’s replacement, the Hawker Typhoon with its Napier Sabre engine. Richard does cover many of the armament experimentations, one of which can be seen at the bottom of Page 9 where Whirlwind L6844 is displaying its four 20mm cannon lined up horizontally. The Whirlwind’s Technical Description follow with plenty of period labeled-drawings and photographs that you might find in an operations or parts manual. Page 37 highlights a few more of the nose armament installation experiments. The next section presents the Whirlwind’s Evolution featuring Wojciech Sankowski isometric views that highlight variant differences. Only one Whirlwind survived the war, and Page 56 features this airframe that garnered the Civil code G-AGOI. Chapter 3 addresses the Whirlwind’s Camouflage and Markings that is highlighted by Richard J. Caruana’s color illustrations as exhibited on Page 69. Chapter Four on ‘Production’ provides an airframe by airframe summary of what happened from beginning to end. Chapter Five finds an entire chapter devoted to Steve Evans build of the new Special Hobby 1/32 Westland Whirlwind kit as shown on Page 85. The sections include:

Richard A. Franks serves up yet another must have model reference. The 96 pages is an easy read, which I got thorugh over two nights. Personally, the timing is perfect as I just got a hold of the new Special Hobby 1/32 Westland Whirlwind kit. The detailed drawings and period photographs provide amazing detail that can be used to detail up any model kit. The Richard J. Caruana color illustrations in conjunction with the Camouflage and Markings chapter make sure you get the correct colors on your kit.

My thanks to Valiant Wings Publishing, and IPMS/USA for the chance to review this great book.