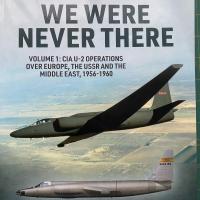 On May 1, 1960, an ex-USAF turned CIA pilot named Francis Gary Powers flying a Lockheed U-2 at 70,000 feet 800 miles east of Moscow felt and saw the results of a Soviet SA-2 missile removing the tail of his aircraft. Thus ended the first round of U-2 overflights over the Soviet Union and the time frame covered in this volume. Despite the international incident that resulted, the information gained about the state of Soviet bomber and nuclear weapon capabilities more than justified the risks taken. The author, Kevin Wright is a university professor specializing in the Cold War. This book outlines the first phase of U-2 operations from 1956 to 1960. The book opens with a brief history of how the U-2 came to be and examines the various equipment packages that the aircraft could carry. Contrary to the public perception of the U-2 only being a camera platform, it carried nuclear fallout sampling equipment as well as receivers for the collecting electronic intelligence. Each of these systems is explained and photographs are provided for some.

As the author makes clear, this book is another in the continuing history of U-2 operations. He has drawn from recently declassified files to take a closer look at certain operations to reveal some interesting facets of these early operations. First, the British were brought on board since the early overflights originated in England. They trained pilots and performed numerous overflights of the European continent and the Middle East. Based on the newly available information, the author shares some of the photographs taken during these missions. Even those photos have been downgraded so as not to reveal their true fidelity. They show just how valuable this information was when there was no other way to get it.

This overflight program not only required pilots of great skill and courage, it also created a team of support personnel needing very special skills to correctly interpret and catalog the vast amounts of information these flights gathered. All this was done with the expectation that the enemy would eventually have the means to intercept them. The book concludes by putting the value of the information gained on these missions in perspective. Even though satellites could perform this mission, they were subject to timing issues that manned aircraft don’t have. This is reinforced by the fact that overflights of the U-2 and SR-71 continued for many decades after. The next phase of U-2 operations is the subject of Mr. Wrights second volume.

As for Gary Powers, he was captured alive. Since he was unable to set off the explosive charge designed to destroy the cameras on his U-2, the Soviets used what they gathered to make a spectacle of the US and convict Powers. He was exchanged two years later for a Soviet spy. I remember hearing Mr. Powers on Los Angeles radio where he was the traffic chopper reporter. He died in August 1977 when his aircraft crashed after running out of fuel.

As a modeling resource, this book has some value. There are numerous period photographs of the aircraft and equipment including three pages of color side views and photographs. I especially like the section covering the drift sight and sextant installations critical to what was a primitive but effective navigation system. This volume is more aimed at the history buff who has an interest in these high-risk operations that allowed the US to make rational, informed decisions during a very dangerous time in world history. For that we owe anyone involved our gratitude.

Thank You to Casemate for the sample and IPMS for sending an enjoyable and educational read my way.