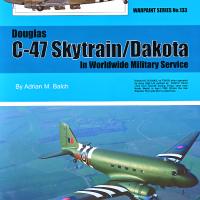 Perhaps the most famous and most long-lived transport aeroplane in history, the DC-3 and its military versions including the C-47 Dakota are still in service around the World some 85 years after it’s first flight. There cannot have been many air forces around the world that have not operated the type and at one point or another still use them today.

It is only fitting that the almost as famous and long-lived Warpaint series of books from Guideline Publications has now seen fit to include the type – the only mystery here is why it has taken so long!

Author Adrian Balch has been a fixture of the British aviation scene for well over half a century himself and has amassed an unrivalled collection of aviation photos, some of which grace this volume.

The book begins with a short history of the DC-3 and the development of the C-47 military version, before rapidly coming to the point of the volume, which is to document the use of the C-47/Skytrain/Dak, by air forces around the globe. This is done in alphabetical order and Balch has done his best to include photos from each nation – though understandably, some of the lesser nations are lacking here. Each country is treated with a short history, though the length and quality of these varies greatly and I suspect the author has had a very hard time getting information about some countries’ usage.

The quality of the photos also varies, though those taken by the author are generally very nice and of great interest, some of them dating back to the late 50s. Most are reproduced in colour, though there are some black and white images too. My only slight quibble is with the reproduction as the colour saturation levels on some of them appear to have been ‘turned up to 11’.

One of the trademark features of Warpaint books is the colour profiles, and this volume is not lacking. There are seven pages of full colour profiles showing 42 different aircraft, followed by two pages of topside and underside profiles of a selection of those aircraft. The last few volumes of Warpaint seem to have taken a different tack with the profiles – whereas one may be used to seeing the profiles clustered throughout the volumes in the past, now they seem to be gathered at the back. In some ways, this does make it easier to compare them (to see which one you’d like to model!), but it was nice previously to see the relevant profiles linked to the subject or chapter at hand. Either way, they are still one of the best features of the series.

Also included, as a pullout section inside the front cover, is a four-page plan set to 1/144 scale, including 10 side view plans of different variants, along with a full 4-view set for a further mark. Rounding out the volume is a three-page photo walkaround that shows the most important bits of a Dakota.

While never intended to be a fully comprehensive reference volume, the Warpaint series has always been a well-written and illustrated aide for the modeler. This volume is no exception and I’m happy to add this one to my shelf of Warpaints. This is a nice and relatively inexpensive reference to add to your bookshelf and is recommended.

Many thanks to Guideline Publications for the review sample!