Villers-Bocage Through The Lens 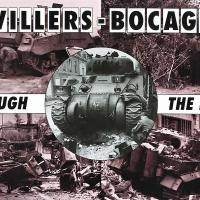 Villers-Bocage in Normandy has, for years, been the battle that made the reputation of Nazi Germany’s tank ace, the SS hero, Michael Wittmann. In this book the battle is analyzed in depth for the first time through detailed examination of the images taken by war photographers after the town was captured by German forces.

The book is a straight reprint of an article in the British magazine After The Battle from 1999. Whether there has been any further reassessment of the battle since that time goes unstated. The text is extremely detailed, giving an almost second-by-second account of the actions. Most of the 100 or so photos were taken by German forces after the battle and are of very mixed quality, ranging from good to terrible, as might be expected! Reproduction is as good as could be expected and the better quality photos are reproduced to full page. Most of the photos show destroyed British tanks, so might be of use to British armour modellers but perhaps more so to diorama builders. It is a shame there aren’t more photos from the British perspective to give some balance.

Not my cup of tea, and I certainly didn’t appreciate or see the need to print photos of dead British soldiers, but if you enjoy looking at photos of destroyed British tanks, or are an admirer of the SS, this is definitely a book for you. Many thanks to Casemate for the review sample.