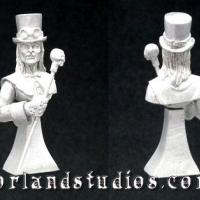 I was intrigued in seeing a 54mm bust available for review. I had painted a few larger scale busts, and have also painted a number of 54mm figures, but never a bust in such a small scale. I asked to review it and subsequently received the Morland Studios 54mm offering of a – or would it be The – Vampyre Lord? I finally settled on The Vampyre Lord because I couldn’t find anything relating him to a gaming scenario or a story line, so I see him as a standalone character. Not personally knowing any vampyre lords, it’s always so hard to figure how they would like to be addressed!!!

Produced in white metal, the kit contains 4 pieces. The head and upper torso are cast as one piece. The right arm is separate, as is the hand, holding a scepter. A pedestal base completes the parts inventory. The casting of the parts is crisp and clean. The few mold lines I encountered were easily removed by light scraping with an X-acto knife tip. The face is well represented, and shows two fangs protruding from the mouth. The Lord is sporting a top hat with a pair of goggles strapped around the brim.

I primed all four parts with a solid coat of Model Master Flat White enamel, applied with a brush. My sample did not include a photo or painting guide and I wasn’t sure what colors were recommended, so I used colors I had on hand. I base-coated the various areas with acrylics from Testors, Vallejo, and Andrea paints. Then I followed up with artist oils to shadow and highlight. I painted inside his goggles to match the hat and lens frames, then put a drop of Tamiya Clear in to simulate lenses.

I fabricated a small oak base to which I epoxied the supplied pedestal base. When the epoxy cured, I attached the torso, then the arm and, finally, the hand. I completed the project with a little surgery to include a felt pad modified to fit such a small base.

This bust was a nice, compact project that can be completed in a relatively short time, and has enough detail to present an interesting subject to paint. I liked the detail in the cape and clasp, which looks good picked out with a bit of silver dry-brushing. I would have liked some suggestions regarding color selection, if only because I’m used to subjects that provide some sort of guide. Shadowing and highlighting were straightforward and presented nothing out of the ordinary. I’m pleased with the overall look of the finished piece and really enjoyed it. I recommend The Vampyre Lord to anyone who enjoys vampyres or other fantasy subjects, historical painters looking for a change of pace, or someone new to figure painting looking for a subject that is easy and will produce a pleasant result. My thanks to Morland Studios and IPMS/USA for providing me this sample for review.

Up close and chilling
Previous Next