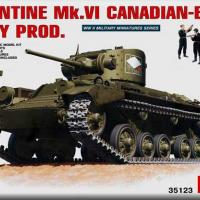 Vickers-Armstrongs privately designed the Valentine. Based on the A-10 Cruiser tank it was submitted to the War Office on Feb 10 1938. The development team matched the lower weight of a cruiser tank to the suspension and transmission of the A10 heavy cruiser, with the superior armor of an infantry tank. The new design was easier to produce and cost less than the older Matilda tanks. The first Valentines used a gasoline engine with conventional steering. The Mark II used a diesel version of the engine while the Mark IV and later variants GMC diesels.

Our version the Mk VI was built under license in Canada by The Canadian Pacific Railway Company of Montreal and was supplied to the USSR. Using Canadian and American mechanical parts, the first few produced had the 7.92 mm Besa coaxial machinegun and were soon replaced by the 0.30 inch Browning. Main armament consisted of one QF 2-pounder (40mm) gun. Weighing in at 16 tons and a top speed of 15 mph with an operational range of around 90 miles. Thirty Mk. VI’s were retained in Canada for a training unit. In Soviet service the Valentine was used from the Battle of Moscow until the end of the war. Although criticized for its low speed and weak gun, the Valentine was liked due to its small size, reliability, and overall good armor protection.

After reviewing the instructions very carefully and studying the parts on the sprue trees I went online and found ample information and a few helpful images, I then went to work. Following the 12- page instruction booklet the build starts in the drivers seating area, four build steps are illustrated five if you count the six-part seat construction. The four delicate small part combination assemblies fit snugly into chassis making for a somewhat busy view if you decide to pose open hatches. Next order of business was the lower hull; this included attaching the end plates, upper track roller supports and rollers, tow chain hangers, six-piece drive sprockets, several road wheels and 4 complex boggy assemblies. Five sprue trees loaded with single-track links may seem like a hard ship but I breezed through them using a chisel point x-acto blade on a cutting mat.

What’s on top? Photo-etch! The next 13-15 steps covered the upper hull area locating where all the small bits go, building and posing the hatches and constructing elaborate engine locker doors. All the while embellishing the details with brass photo-etch. Last major components to work are the turret and gun covered in the last 15 or so steps that include a detailed interior featuring a gun mantle and radio set.

Bonus build- five crew figures all handling the large shells they went together nicely and were simple to construct.

The Bottom line: AWESOME KIT. I recommend it to the patient modeler.