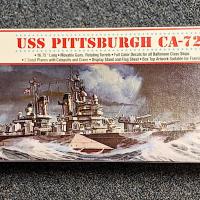 Atlantis continues to re-release some of the kits a lot of us grew up with. This example is the 1954 Revell U.S.S. Pittsburgh. The kit was re-released many times over the years as the Pittsburgh, the Helena and with new parts updating it with Terrier missies as the Boston and Canberra. This release is in its WW II guise. You get decals for every ship in its class (Baltimore heavy cruisers), but you run short of bow numbers for some, like the one I did, the U.S.S. Toledo. The model is a member of Revell’s “Flat Bottom Navy” and has no hull detail and a flat bottom. Better for scooting across the floor by young budding captains I suppose.

There are a lot of parts in this kit for a 1954 kit and unfortunately the molds show their age in that there is a lot of flash and mold seams to deal with as well as some of the detail getting pretty ‘mushy’. Fit is not great. The superstructure needs a lot of work to mate correctly, slide in deck parts need locator slots enlarged and most locator holes in the deck for various parts need attention as well. The five-inch gun mounts have their platforms molded as part of the turret and the guns themselves are, well, not good. However, all that being said, it was still fun to build. Since the kit had so many limitations, I just took it as it was and didn’t worry about accuracy, detail and getting a perfect finish. With care, it can still be built up into a decent decorator piece for a den shelf or mantlepiece.

This kit is not for the true naval enthusiast and it isn’t meant to be. It’s meant to be a reasonably priced, fun, simple nostalgic build that results in a presentable model and in that it succeeds. It might make a good project for a parent/child effort but be aware that it can’t be completed in one sitting and there are many small parts to deal with.

While Atlantis no longer has this listed as available on their website you can find them at your local hobby shop.