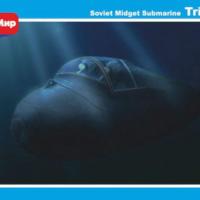 Mikro-Mir is one of the Ukraine’s smaller model manufacturers, specializing in submarines and odd-off aircraft in various scales. As a limited-run company, their models require a certain amount of TLC to achieve optimal results, but their kit selection holds so many strange and otherwise never-modeled items that they’re definitely worth a look. The Soviet-era Triton-1M is one such unique kit.

Looking very much like something out of a James Bond movie, The Soviet Triton-1M, developed in the 1960’s, was a two-man midget submarine intended to be deployed off surface warships for covert reconnaissance missions and sabotage. According to official documents, only 32 were made and they have now been largely decommissioned. It had a “wet” cockpit (non-pressurized) and the crew wore diving gear during missions.

Mikro-Mir’s 1/35th scale model of the diminutive craft includes clear parts for the canopy as well as a photoetch sheet of very tiny parts. It also has a surprisingly high-quality decal sheet offering two variants, one being a prototype test vehicle in colorful markings.

Unlike most submarine models, this one begins with a fairly thorough interior build including a multi-layer photoetch-enhanced control panel with some of the tiniest parts I’ve ever encountered. Rather than argue with the rug monster over each and every lever and switch, I replaced these with stretched sprue bits which were fractionally easier for me to handle. The rest of the interior includes what I assume to be large battery casemates and rudimentary seats for the crew, who sit side by side. With the exception of the control panel there’s nothing here that should pose a particular challenge to anyone passingly familiar with limited-run kits. Attaching the control panel after the hull was assembled took a bit of fidding, though, so you’ll want to take your time here.

The rest of the exterior goes together relatively quickly, as there aren’t that many parts to it. However, the fit is none too good and you should be prepared to do a fair amount of filling and sanding, especially around the integral tail fins. Having made a number of Mikro-Mir kits in the past, I was expecting this issue and wasn’t intimidated by the prospect. While at it I decided to replace or enhance some of the exterior detail that wasn’t that sharply defined, including the large hatch on the top used to extract the batteries. Such enhancements, however, are not by any means necessary to achieve a good finish.

A small base which merited no mention in the instructions is also included, which certainly helped me figure out a reasonable way to display this little charmer. All told, I probably spent no more than two hours on the exterior assembly, including detailing, filling and sanding.

At this point I could proceed to the fun part, which was the painting and weathering. It’s always a fun challenge to make something which is essentially black visually intriguing, and this was no exception. A little dry brushing and some rust spots added to the appeal considerably. Happily, the few decals I used went on with no visible carrier film and were commendably thin.

Admittedly, I made a number of boffles overall during this assembly (steering rudder too far aft, solid rear canopy, etc.) but given how little we actually know about this secretive program, I can claim the fudge factor and still be quite satisfied with the final product. So I get to add yet another interesting tiny submarine to my growing collection, and can state without hesitation that this is yet another fun, unique subject from the fevered minds at Mikro-Mir. My thanks to Mikro-Mir for their continued fascination with the bizarre and unusual, and to IPMS/USA for the opportunity to build this little gem.

Size for Reference
Previous Next