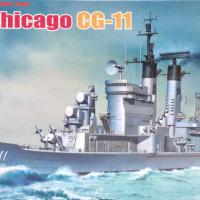 This is the second Cyber Hobby ship model that I have been privileged to build as a reviewer (the first being the USS Virginia), and I will say that this was just as enjoyable of a build, representing a cruiser that saw service over five decades. There were no real complications with the build itself, but know going in that there are several photo etch items to add, and there are many small parts in the kit. The most challenging part of building this kit for me was the decals that are applied on the deck. If you have a fondness for the USS Chicago, or want to build a Baltimore-class heavy cruiser, I would highly recommend this kit for you.

The USS Chicago saw some service in the Pacific during the closing months of World War II, and then spent some time on occupation duty before returning to Bremerton, Washington, where she was placed in reserve on 6 June 1947. Not being finished yet, in 1958 the ship was selected to be upgraded to a Guided Missile Cruiser (CG-11), and the refit was completed in the San Francisco Naval Shipyard, taking place between 1959 and 1964. She would go on to serve five tours off the coast of Vietnam, would have a refit in 1972 to update her fire control systems, and would finish her career with the Pacific Fleet. One of the ship’s anchors was placed on display in 1995 at Navy Pier in downtown Chicago.

If you check out the box before you open it, you will notice the words “This kit contains over 300 parts”, and I am going to take Cyber Hobby on their word. There is a lot of plastic in this kit, making the price per part very small, and there will be plenty of leftovers. The plastic is similar to the medium gray product you will find in a Dragon kit, with a slight texture being present on many of the moldings. Since the advent of slide mold technology, the model ship industry has also benefitted from better detail in single moldings. The photo etch fret contains forty-two items, including an air search RADAR (to replace kit part F4), the structure beneath one of the RADARs, and several ladders and stairs. The decal sheet is small, with markings for only the USS Chicago, and many of the decals are within the larger circular decals on the sheet.

For some building tips, in step three I used 0.008” bronze wire in place of parts MA14/E21, as the plastic appeared thick, and the PE was too flat. In step seven, I attached parts E5 to the deck of the ship rather than to the underside of parts E7 and E6 to prevent an alignment issue later on. Also in this step, I recommend installing the assembly later identified as F7 prior to installing the boats consisting of parts E27 and E28. I also pre-painted and gloss-coated the areas for the decals that go on the decks, and placed them prior to installing the ASROC and Talos launchers. Finally, if building the full hull version, match the pins on the pedestals to drill bits for sizing, as the supported holes in the hull are larger than the pins that insert there.

As far as my hits are concerned, the detail for this 1/700 scale ship is simply amazing. The photo etched items are a nice upgrade for the plastic items that they replace, and are really a necessity for the ladders and stairs. I even felt that the miniscule missiles, ASROC launcher, and torpedo tubes had outstanding detail for this scale. I also like the presence of thinned folding edges on the photo-etched items, which helps to identify where to make the bends and keeps them consistent.

My one true miss for this kit was with the decals. I had issues with most of the decals not wanting to release from the backing paper, and I waged a long and rather unsuccessful battle with the helicopter landing area decal. The round decals for the Talos and ASROC launchers are challenging, but can be fought into place with time and patience. I really would prefer some additional carrier film with these large and delicate items to aid in their installation.

In conclusion, I would highly recommend this kit to anyone wanting to add the USS Chicago CG-11 to his or her collection, or those who wants to have a Baltimore-class cruiser. I would recommend this kit for more experienced modelers due to the number of very small parts. The only challenging photo etched part is the large RADAR array, but I thought that it folded into shape just fine with a little patience.

I would like to thank the folks at Dragon Models USA for providing this kit to the IPMS for review, to Steve Collins, who runs the review corps, for selecting me to do the build, and to you for taking the time to read my comments.