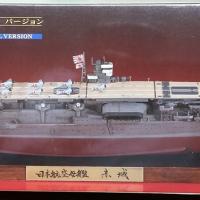 The Akagi is arguably the best known of Imperial Japan’s aircraft carriers. Like the American carriers Saratoga and Lexington, she was laid down as a battle cruiser, and then converted to carrier as a consequence of the Washington Naval Treaty. Commissioned in 1922, Akagi was Japan’s second aircraft carrier (after the diminutive Hosho). Initially built with three separate flight decks, Akagi was updated in the 1930s to handle larger and heavier aircraft. Gone were the three separate decks in favor of a single flight deck running the length of the ship, together with an island structure added to the port side.

Akagi served as the flagship of the Kido Butai (Japan’s primary naval strike force) where she saw significant action in the opening months of World War II. Akagi took part in the attack on Pearl Harbor, the invasion of Rabaul, the strike on Darwin, and the Indian Ocean raid. She was Admiral Nagumo’s flagship at the Battle of Midway, where she fell victim to Nagumo’s fateful decisions and the skill and bravery of American pilots. With a fully armed strike force awaiting launch (as well as discarded ordinance in the hanger deck), Akagi was fatally damaged by American dive bombers, who scored with two near-misses and one hit near the island. A chain of subsequent explosions sealed her fate, although it wasn’t until the following morning that she was sent to the bottom by Japanese torpedoes.

Hasegawa’s 1/700 Akagi was originally introduced in the 1990s, and has seen several re-releases since. The current iteration offers a full hull version, with an optional ‘Super Detail’ upgrade. Hasegawa also offers a wooden flight deck upgrade that is not part of this review (Pt# 72152, $62.99).

The kit itself comes in a standard top-opening box, with a photo of the completed model on its top. There are seventeen sprues molded in dark gray, one in red, one in light gray (aircraft), some white metal parts, a wooden block, and the decal sheet. Most of the ship’s parts are molded in dark gray. This plastic is relatively soft and has good surface detail. Flash was found on many of the parts, perhaps a symptom of the age of the molds. The lower hull, rudders, prop shafts, and part of the display stand are in red plastic. This plastic is hard and brittle. The aircraft are molded on a single sprue of light gray and include 5x Zero, 4x Kate, 4x Val, and 3x Judy. The propellers are in white metal, as are the splinter guards that attach to the island. A Precut and drilled wooden block in included as a display stand. The kit instructions consist of a single, large folded sheet. Color callouts are for Gunze Aqueous and Mr. Color paints. Also included in this review is the Super Detail Set that goes with the kit. This consists of two sheets of photo-etch, containing almost seven-hundred parts, and a replacement flight deck.

I tried to follow the instruction sequence as much as possible for the ship itself, which starts with gluing the two hull halves together. Alignment here was pretty good, although some of the raised details were lost when removing the seam lines. Several internal braces go inside the hull, and it’s important that these face the correct way as they provide attachment points for the deck. Before adding the lower hull, I drilled out the holes where the display stand attaches. A lot of sanding and filler was needed where the lower and upper hulls met, and there were a few low spots on the red plastic that needed attention. Most of the work on the hull went into the gun tubs and their supports, which required a lot of careful cleaning of mold lines and sprue attachment points. The guns themselves are pretty clunky and plain looking, so some aftermarket guns would be a nice add-on. I used the Linoleum (from Gunze’s CS642 IJN & Passenger-Cargo Ship Camouflage Color Set) for the decks. The lifeboats, which pack the stern deck, also required a lot of careful cleanup and painting. Once the basic hull was together, I sprayed the lower hull with Hull Red, masked it off, and then I sprayed the upper hull with Gunze’s SC02 Sasebo Gray (from Gunze’s CS641 IJN Arsenal Set). Once everything was dry and the tape removed, I glued the hull to the two display mounts. I stained the wooden block with some mahogany stain and attached the ship to the stand. Assembly of the basic plastic hull was pretty uneventful, and overall, went together well. Now for the fun part….

The detail set is made up of a replacement deck and 690 pieces of brass photo-etch. Being 1/700, some of the PE parts are remarkably small. Hasegawa gives no extra copies of the tiny parts (other than a huge overabundance of parts for the aircraft). Several weeks (and a few dozen scalpel blades) we spent cutting, cleaning, and assembling the bracing that goes on the underside of the deck. I cut and assembled this inside a box from another kit, which minimized the chance of losing parts off the desk and into the realm of the carpet monster. Though tedious, the parts go together very well, like a miniature 3-D puzzle. A typical structure includes a long strip of PE folded into a three-side shape, then numerous crossbeams slotted into the long strip. Some basic PE tools are a must for this. Some of the parts (long beams) that must be folded into box shapes are very thin but several inched long. Everything was locked together with a drop (I use a needle with the eye cut in half, mounted in a pin vise) of thin CA.

Before attaching the PE to the deck, I painted the top side with Gunze’s wood color, then masked it off and painted the metal parts Sasebo Gray. Hasegawa recommends temporarily attaching the deck to the hull and setting the structure upside down. Then the PE assemblies can be glued into place. This would have worked if I had not already added all of the gun tubs, which completely blocked access along the sides of the hull. I ended up using the patterns etched into the underside of the deck as a guide.

Once the PE was attached, and the underside painted Sasebo Gray, it was time to fit it all together. The deck supports at the bow were easy to fit, as they cleanly slotted into both the deck and holes in the PE girders under the deck. The eight PE columns at the stern were a nightmare. There is no clear mounting location under the deck, and the instructions are very vague. The pieces are very delicate, yet they must be massaged into the correct position. The PE girders on the underside of the deck are a very tight fit, and it was very difficult to wiggle the deck in place while keeping the eight columns in the generally correct position. Lots of touch-up paint was needed.

Also included in the PE set are lots of sections of railings, many of which required several complex bends. I bent PE to the correct shape then got them all in the paint booth. Metal primer went a long way towards making the paint stay in place. I attached the railings with a combination of fast CA and thin Gator’s Grip Glue. The railing at the bow and stern are very fragile; down to a single strand of wire.

The island was the last major unit to assemble, and it went together easily, although the PE railings were not a great fit in some places.

The aircraft for the kit were painted per the directions, although I did not include the three Judy aircraft as this type of aircraft never saw service on Akagi. Next came the decals, and they were simply abysmal. The decals were the thickest I’ve seen in a very long time. They simply would not conform to the wooden deck or the curves on the tiny aircraft. I used a large portion of a bottle of Solvaset on the heavily Futured deck before finally giving up. There is silvering aplenty still remaining. If there are no aftermarket (or dry transfer) markings for the deck, I recommend trying to paint it. The kit decals are useless. Once all was in place, everything was covered with a layer of Alclad Flat Kote.

The white metal propellers cleanup easily and were attached to the propeller shafts with CA. The white metal parts representing the splinter guards for the island were not used. Despite bending them per the directions, I could not get them to fit. They are too brittle to adjust, and after two of them broke while trying to adjust the bend, I decided not to use them. I’m not sure why these are not also given in plastic, since these are not so detailed that and white-metal alternate for plastic is really necessary.

Overall, the plastic and PE parts fit very well. This is a complex build, so experience and proper tools for PE is highly recommended. The decals need to be replaced; they are junk. Detail is very good, although some aftermarket guns are needed to match the other details.

Thanks to Hobbico/Hasegawa and IPMS for the opportunity to review this kit of an iconic ship.