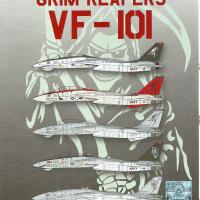 DXM, which stands for Double Excellent Models, was started by a group of modelers in Taipei, Taiwan. The group started manufacturing decals in 2010 covering a broad range of aircraft, including an extensive list of Japanese air command meets.

This sheet covers fabled Grim Reapers squadron of VF-101,, previously of VF-52. This is a surprising feat as the Navy usually does not rename squadrons after disestablished units. The Grim Reapers operated primarily the F-14 Tomcat and has recently converted to the F-35C at Eglin AFB Florida. The aircraft covered are as followed:

The Decals are extremely vivid with crisp nice reds, dark blacks, and I could see no carrier film. They are printed by Cartograf on a single large sheet and 2 smaller sheets containing more national insignias and 1 black glare shield.

The decals have a 4 sheet instruction booklet covering paint schemes, color callouts, along with decal and stencil placement on the front and back. The single Decal sheet has all Special markings, tail codes, and stencil data. You’ll have five choices of special markings and enough stencil data to complete all 5 variants.

The Color callouts are for GSI Mr. Color and Humbrol but the FS numbers are also included, which make converting to the paint manufacturer of your choice easier.

No Kits were specified, but from my previous reviews I am pretty sure you will want to use the Hasegawa kit, at least from my personal perspective.

My thanks to IPMS and DXM models for giving me the opportunity to review these decals.