US Vietnam Ammo Bunker, Type I 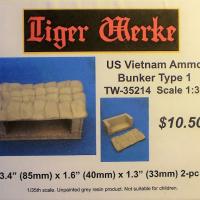 During the Vietnam War the U.S. Army established fire bases in various locales to support the far flung forward operating /patrol bases set up to...well...patrol the country side. The fire bases were locations where emplaced artillery, either towed or self-propelled, could rain artillery fire down on unsuspecting enemy combatants and the occasional, errant water buffalo.

These fire bases were more often than not semi-permanent operating bases. With the passing of time the personnel at these areas would embellish and improve their living and work environments. Improving that work environment often took the form of some creative DIY projects. One such improvement was the stowage of ammunition for the 'Tube'. [ Technical Note: 'Tube' is cool artillery talk for the actual artillery piece.]

With all the empty ammunition crates and plenty of sand some enterprising young lad came up with the idea of using those material to build a bunker for ammunition stowage. Thus was borne the Vietnam- era ammo bunker. ( Yes, I making most of this up.) These protective structures were fashioned with the aforementioned , now empty, wooden ammo crates for walls and floor with the judicious placement of sand bags on the roof structure. The roof could be fashioned from a sheet of plywood or other suitable material (steel matting, loose piece of corrugated sheeting, etc.)

To aid in your next project depicting the Vietnam War, Tiger Werke has provided a Vietnam-era style two-piece ammo bunker in gray resin. Assembly is pretty straight forward as the 'roof' just sets on the bunker. The real joy of this accessory item is in the painting and weathering of it. It should be noted that the resin casting is first rate with some nice wood grain cast into the ammo crates and wonderfully done sand bags. One very minor item, for me, was the detail for the grab handles on the crates. The actual ammo crates had rope for the grab handles. Fixing that detail is easily remedied with the removal of the offending cast bit and replacing it with some cord or string. (In 1/35th scale that can be done with the twine/cooking string you use to truss a turkey or roast.)

I started colouring my ammo bunker by applying a black primer coat from a rattle can. After a not so through drying I smeared on a thinned ( w/H2O) coat of Raw Sienna on the ammo crates. The sand bag portion (roof) of the ammo bunker was treated to a coat of Pueblo. Both the Raw Sienna and Pueblo are acrylic craft paints from Folk Art. I dusted the entire structure with some Europe Earth pigments from AMMO/MiG. (What else would you use?)

This Vietnam Ammo Bunker, Type I is part of a series from Tiger Werke. The other two bunkers (Type II / Type III) as well as this offering are now available either from Tiger Werke or your local retailer. With the addition of some separate ammo crates and a few shell casing these resin ammo bunkers will be the finishing touch on your next project

Thanks to Tiger Werke and IPMS/USA for the review copy.