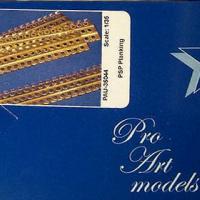 PSP, or pierced/perforated steel planking, was used from shortly before WWII onwards as a means to create a hard surface for military operations where one wasn’t provided by nature. The planks, made of steel or (later) aluminum, were made in several styles, were generally about 10 feet long by 38 inches wide, and weighed about 66 pounds each (steel). The most common hole pattern was 3 wide by 29 long. They are also known as Marston mats after a town in North Carolina where they were manufactured in some quantity. They were used extensively in Vietnam, and are readily available today to civilians as used or new government surplus.

PSP makes the ideal base for a model alone or in a diorama. Several styles of resin bases featuring PSP have been available for years, but this is the first photo etched alternative of which I am aware.

Two of the resin jigs are oblong resin pieces with casting blocks attached which are best removed. They don’t work well if you leave them on, but they are very easy to remove with no damage to the jig. After detaching a plank from the fret, you lay it on the long jig with the tray, and then lay the other long jig on top. Clamps are used to compress the plank, forcing the projections on the one jig into the photoetched plank, thereby forcing the plank into a corresponding groove on the other jig. It really is pretty self-explanatory when you open the package and look at the jigs, and it’s a lot easier to do than to write it up like this.

This produces two incised grooves in the plank running the entire length. This gives depth to the plank, just like the real thing. I found that just compression did not give as much depth as pressing hard and “grinding” the jigs together, rubbing back and forth with my hands. But you can get as much depth as the resin jigs can stand pressure – it works.

The other two jigs are used to enhance the holes in the plank, which on the real thing were drilled to reduce weight – so-called “lightening holes.” The one jig is a base with a hole in the middle, upon which you place the plank. The other jig looks like a candle for a birthday cake, but is just the diameter to force into each hole on the plank in turn, down into the hole on the base jig, adding depth to the pierced portion of the PSP. Again, greater pressure produces more relief, and I opted for minimal relief.

It really is a sweet and simple system, enabling the photo etched planks to become 3-D. A plank can be created in about 10-15 minutes, the whole box done in an hour. Hooks on the side of each plank will interlace with other planks and combine to form the unequal, stepped look of the real thing.

There were a variety of finishes applied, and the steel version rusted easily. The planks were painted in at least two shades of green/drab that I found, and possibly more. I tried 2 different metal coatings, one rattle can enamel which looks aluminum-like, and one airbrushed acrylic, which shows a rougher, more steely texture. On one plank, I added some MiG pigment to show the rusting potential. I did not try a lacquer-based paint but, with the proper primer, it should be possible, if that is your particular poison.

This is the best simulation of PSP I have come across, and I’ve used several cast resin bases. Each fret will make a section of matting about 3-3/8” by 2” when connected, which means at least two sets depending upon vehicle size to create a base for a single vehicle diorama. They are also suitable for slinging onto a vehicle singly or in a bundle as extra stowage. The only drawback is the price. At $21 for the kit with the jigs and almost $8 for the fret alone, you’re looking at around $30 or more to create the base.

But – it will be worth it, especially if carefully painted and weathered. Nothing, as they say, has the look of real metal like real metal, and with the depth created by the jigs, they are bang-on scale, which has been an issue with cast resin.

The sets are available from Pro-Art at their website. Many thanks to the folks there for a great product that was a pleasure to review and to IPMS/USA for the opportunity to review it.

Jigs in action
Previous Next