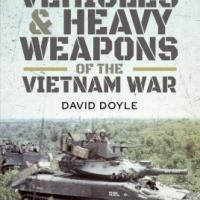 Author David Doyle was recently awarded the coveted Bart Vanderveen Award by the Military Vehicle Preservation Association in recognition of his contributions to the preservation of military vehicles. He has written more than 100 books and has most recently applied his formidable talents to documenting the many vehicles used by US forces in the Vietnam War.

The sections are organized by the ascending size of the vehicle. Each vehicle’s chapter consists of a table(s) of specifications, a narrative of how the vehicle was designed and procured, and a variety of pictures showing its variants. The photos show clean stateside examples as well as weathered operational ones. They generally have been taken from a variety of angles. Only a few of these pictures capture the interior details or engine compartment of the vehicle. Many show stowage details. The operational photos are dated, which is a help to the modeler seeking ultimate accuracy. Several of them depict field modifications that provide opportunities for scratch building.

The majority of the vehicles on Doyle’s list are logistical in nature, so the settings are mostly on bases and behind the lines. This may be useful to the creators of dioramas.

Doyle’s work includes all of the iconic American armored weapons of the Vietnam War: M42, M48, M50, M107, M551, etc. However, it is not limited to weapons systems. You will also find a complete roster of the various jeeps, trucks, ambulances, armored personnel carriers, and engineering vehicles. He describes items in USA, USMC, and USAF service. The book features many obscure vehicles like the M559 fuel tanker and the amphibious LARCs, enlarged descendants of the WWII DUKWs. This book is inspirational as it awakens the modeler to consider subjects that only rarely find their way to contest tables.

This work is best seen as a concise encyclopedia. For a specific modeling project, one will want to augment this reference with vehicle-specific information. Doyle notes his appreciation for the archivists at various museums and archives, but unfortunately he does not include a bibliography or list of suggested resources for further study. Neither does he include a list of his other works which would aid the modeler of Vietnam War vehicles.

Doyle has confined the scope of this work to American-operated vehicles from 1965-1973. Therefore, this work does not describe vehicles in Australian, French, South Vietnamese (ARVN), or North Vietnamese service. Consequently, you will not find a chapter describing vehicles such as the M41 tank that was US-made, but ARVN-operated. We are told that this is the first of a series of books. Therefore, it seems likely that forthcoming projects will address these other subjects.

Doyle’s U.S. Vehicles & Heavy Weapons of the Vietnam War is an excellent reference for anyone interested in modern armored vehicles and/or the Vietnam War. It is produced with high quality and Doyle is thorough in his documentation. With its excellent organization and wonderful photographs, this work is highly recommended. This book will inspire you to build a model of an American armored vehicle in Vietnam service. Special thanks go to Casemate Publishers for providing this book for review.