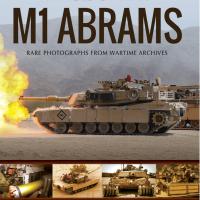 If you are a fan of the M1 Abrams, which has now been in service for over 30 years, David Doyle satisfies your visual needs with this book showing images of the XM-1, M1E1, M1A1, M1A2 SEP as well as some variants in between. For Abrams fans and modelers alike, the photographs provide a wealth of detail for the tank from the prototype through the M1A2 variant. The author provides many of the photos, but there are also plenty taken by the military that shows these tanks in action. Overall, this is a great visual history of the tank beginning with photographs of the XM1 in 1976 and concluding with the M1A1 and M1A2 in 2017.

Following Acknowledgements and a short Introduction, there are eight Chapters (The XM1, The Improved Performance M1, The M1E1, The M1A1, Mine Plows and Blades, M1A2 SEP, The Assault Breacher Vehicle, and The Abrams Deployed) and an Appendix. The author explains early on that this book is not intended to be a written history of the Abrams, but rather a visual history of the tank, so aside from the Introduction; the only text is for the photo captions. In short, if you purchase your books more for the pictures than the words, you will truly enjoy this publication.

Named for General Creighton W. Abrams, the M1 has been a staple in the inventory of the United States Army and Marine Corps since the M1A1 began delivery in 1985, and there are currently being plans to use the M1 until 2040. The power pack for the tank has proven itself over time, and while there are half a dozen photos of this, if you are looking to plumb the engine out in a build, you will need some additional references. The vast majority of the photographs are in color, with a select few being in black and white. As the intent of the book is to show the tank in action, do not be surprised by the relatively few pictures of the interior of the tank.

Overall, I would highly recommend this book to any modeler or historian wanting a great photo archive of the Abrams from the very beginning through the M1A2 as well as the variants of these models. The images are well produced, can be appreciated by any fans of the tank, and will be of use to modelers making any of the variants of the M1, especially if making one used in mine detection.

My thanks to David Doyle for providing this book to the IPMS-USA for review, and I appreciate having the opportunity to write this appraisal. As always, thanks to you the reader for taking the time to read my comments.