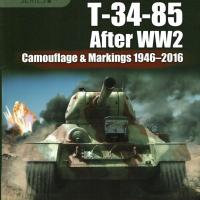 The T-34 series of tanks together with the M4 Sherman series are THE most important tanks of the Second World War from the Allied point of view. The Panther tank, perhaps the most influential tank of WW2 from the German perspective was a direct result of German forces running smack bang into the T-34/76 on the Eastern Front, and the demand for German industry to provide a counter to it. In turn the T-34 needed to be upgraded once the Germans introduced more thickly armored tanks such as the Panther and the Tiger, and thus was born the T-34/85, an upgrading of the T-34 series from its original 76mm main gun, to a more lethal 85mm gun.

Production of the T-34/85 continued post war in the Soviet Union for a short time, and then for much longer periods licensed production took place in Czechoslovakia, Poland and Yugoslavia. Licensed production met the demands of the local armed forces of these nations as well as a massive export market. T-34/85s faced off against UN Forces in the Korean War, both in the hands of North Korean troops as well as Chinese troops. The Arab armies facing off against the Israelis in the Middle East utilized the T-34/85 in large quantities starting in the late 1950’s with shipments of the tank firstly to the Egyptians, and later to the Syrians. In the 1970’s and ‘80s, the T-34/85 found its way into various African conflicts involving the armed forces of Somalia, Ethiopia and Angola. U.S. backed forces ran into Cuban Army T-34/85s during the Bay of Pigs fiasco, while in Europe the T-34/85 took part in various “disputes” such as the 1956 Hungarian crisis (both sides fielded the tank), right up to the 10-year Yugoslav Civil Wars of the 1990s.

This new book from Mushroom Model Publications is a “must have” book for anyone interested in the history of the T-34/85, and its seminal place in the post-WW2 world’s conflicts. It is a large format book, with the pages measuring 8.25 by 11.75 inches, and is 112 pages in length. The book is loaded down with over 150 black and white and color photos, plus 40 color profiles. These profiles are very large in size, and thus show lots of detail. The photos are for the most part very well produced. None of the photos or color artwork is marred by being across the spine fold of the book.

The title is nicely laid out, starting as it does with short chapters on the post-WW2 production of the T-34/85 in the Soviet Union, followed by licensed production in Czechoslovakia, Poland and Yugoslavia. Written descriptions are provided of the changes made on the production lines to improve the tank, compared to the earlier WW2 production T-34/85’s. Following this information, we launch into mini chapters on the T-34/85s utilization in “Asian Conflicts”: Korean War, Vietnam War and the conflicts in Afghanistan. “Middle East”, covering use in the Arab/Israeli conflicts. “Africa” and “Post-War Europe” and “Bay of Pigs”. It is a stretch to call all of these real chapters, as the “Africa” listing is only one page in length. But this isn’t the meat of the book, that comes with the “Paint Schemes and Markings” section, which covers 70 of the book’s 112 pages. One gets a listing of all the nations that used the T-34/85, from Albania to Zimbabwe, with nearly 30 nations covered. Each nation gets at least one color profile, with multiple profiles provide for the Soviet Union and Poland while China and Syria, for example, get two profiles each.

As with most late WW2 and Post WW2 Soviet tank programs, the T-34/85 was involved in various attempts to upgrade the vehicle to keep up with changes on the battlefields. The final 16 pages of this book is a photo essay covering modernization programs initiated by the Czechs, Yugoslavs, Poles, Bulgarians, Chinese, and Romanians. Once again, the photos on these pages are for the most part very well produced, and will provide lots of information to the modeler wishing to kit bash “modernized” T-34/85s.

Books covering post-WW2 tanks are few and far between in English, so when a great book comes along, it should be snapped up with enthusiasm by anyone interested in such tanks. This is one such book, and anyone interested in this important Soviet and “world tank” would do well to seek it out at their earliest opportunity before it becomes scarce. You won’t be disappointed. My sincere thanks to Mushroom Model Publications for allowing me to review this superb book and share it with the Society’s members.