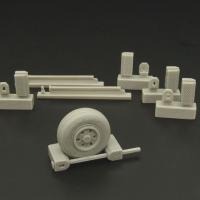 Brengun has produced a detail set of modern US Navy Wheel Chocks. With all the plethora of 1/48 scale kit out there, these make a great display item. The set consists of twelve nicely cast resin pieces. Four of these are the blocks, two are the rails, four are the ends to the block and the last two are two tiny locks for the rails. The tread patterns and lines on the blocks is very well defined. The ends are separate in this scale to allow a good channel for the rails. The rails include the toothed pattern used to lock the chocks in place just like the real item. The lock are very small so caution will be needed.

Preparation of the set requires removal from the casting blocks. The large pieces are a snap. Be careful removing the rails. The resin is strong. I used a photoetch razor saw and slowly worked it off with no issues but patience is needed. Same goes for the locks- they are so small as to be almost invisible. The ends are separate in this scale and need trimmed and sanded to fit which is quick and easy.

I primed them with Alclad gray primer. I looked over the Internet and found that yellow and orange were the normal colors so I settled on yellow. Several coats later I let dry overnight and the next day, I gave all the parts a wash which was cleaned off for a nice dirty, well-used look. A flat coat finished the parts.

I assembled the rail into one end. Make sure that the alignment is correct. I didn’t and if you look closely, I glued the rail in backwards like an idiot. Of course if I read the instructions, but I am a modeler so that wasn’t happening. The ridged sides point inward. Look at the pictures which show the correct orientation. I glued the lock in and left the second block loose to fit around tires.

I used a 1/48 Goshawk and took a few shots. The parts fit well and look great. Recommended. My thanks to Hauler Brengun for the review sample and to IPMS/USA for the chance to review it.