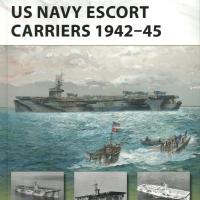 Osprey Publishing continues to expand its New Vanguard series, this time by adding a book on the US Navy Escort Carriers for the 1942-45 period, I topic I have always find fascinating. Escort Carrier were known as CVE (“Combustible, Vulnerable, Expendable”) and despite that popular label, they contributed a big deal towards the Allied victory in WWII.

The book has a very reasonable breakdown of the topic into the following chapters: Introduction, The Rise of the Escort Carrier, Evolution in the Escort Carrier Design, Escort Carrier Air Groups, Weapons and Radar, plus a chapter on Escort Carriers at War and finally a description of each CVE class: Long Island plus Charger (prototype CVEs), Bogue Class, Sangamon Class, Casablanca Class and Commencement Bay Class.

These carriers were meant to be produced fast and in large quantities. Their air complement was limited in size (12 to 18 airplanes typically) so these carriers had to operate in small groups, typically of 3 CVE to become an effective fighting force. They were lightly armored and carried a limited AAA defense which was not a real problem in the Atlantic, but it became its Achilles Heel in the Pacific, mainly when facing kamikaze attacks.

I’ve found particularly interesting the chapters about the “CVE at War” and the description of each class. The chapter covering their combat operations has an Atlantic and Pacific subsections, covering among others: Battle of the Atlantic, Capture of U-505, Torch Operation, Gilbert Island invasion, Marianas invasion, Battle off Samar, Luzon, Okinawa, etc.

The chapter that covers all the classes, concisely and accurately provides the basis and details of each CVE type and also allows to see the evolution from class to class, including adding an carrier island, adding a second elevator (for more efficient combat operations by recovering in the bow elevator and dispatching in the aft elevator) to finally reach the Commencement Bay class, which were in practice light fleet carriers.

The author has done a great job writing this book, providing an excellent balance of historical facts with an easy reading.