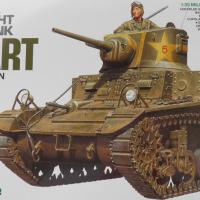 When I was younger my comics of choice were of the Military persuasion and one of my favorites was The Haunted Tank which initially featured an M3 Stuart blowing away Tigers with it’s 37mm. I didn’t realize the issue with that but I loved the stories and so started my love of the Stuart. As I got older I turned to more history books and read about the Honey used by the British in the desert and the US in Tunisia. When the new Tamiya kit showed up it just had to be built even though I haven’t built a 35th scale tank in, cough, 40ish years.

This is the second version of the Stuart that Tamiya has done and thankfully they have done a completely new tool for this kit which gives some lovely detail. There are 183 parts in green plastic, 4 clear parts, 2 rubber tracks and a string for the tow cable. Those poly caps are included to let the front sprockets turn and the main gun to elevate. There are 3 markings options in the kit. A US tank in Tunisia and 2 Russian tanks. An interesting option is two separate tanker helmets so you can depict either a US or Russian tanker, a nice touch.

There are 20 easy to follow steps in the instructions. There is a 4-view drawing for the US scheme and side view drawings for the Russian vehicles. The decals look good. Color callouts are for Tamiya paint and the colors are notated throughout the build.

The build starts with the lower chassis which is made up of a floor, two side plates, a front and back end, and an internal brace. The fit throughout was typical Tamiya so no issues. You then build up the running gear. One advantage of a Stuart is there are not too many of these which gets you into the upper chassis build fairly quickly. I left the clear light lenses off until final assembly as well as the machine guns. The other two clear parts look like windows for the driver and gunner positions that would be visible with the front armored doors open. The kit doesn’t mention the clear parts and doesn’t show an option for the armored parts to be open though it looks easy to do. Since there is no interior provided there is no reason to leave them open. Maybe this will be an option on a later release.

While most of the build was trouble free, I did have issues in a couple of places. The first was when adding the back plate D32 which is done in step 9 and then the upper engine plate D33 which waits until the next step. I managed to mount D32 a little off and D33 would not fit correctly. Took me a moment to realize the issue and I was able to pry off the back plate and place it correctly. Something most of you will probably not have any problems with but I have to create some drama in my builds. The second involved the .30 cal machine gun mounted on the turret. This is a very detailed gun with multiple parts making up the cradle and the gun itself. Just be careful lining everything up and it will all come out perfect in the end.

Once you finish the upper hull the instructions want you to add the tracks and front drive sprockets. I skipped this step to make painting easier.

The turret is made up of two sides and the turret ring, gun mantle, a separate roof, and the several hatches. A half figure is included with a mount you put in the turret when building it that he rests on. The detail of the commander is good though I would have liked his goggles to have been molded in clear. I already mentioned the two helmet options.

Other options include hull machine guns for the Russian versions, separate hatches and you can have the turret 30 either loaded or with the ammo box closed. There are fuel tank mounts for the US version though the tanks themselves are not included. The only extra gear included are 2 more ammo cans.

The tow cable is made up of a piece of string and a couple of plastic ends. While it looks convincing the instructions say to cut the string 175mm long and it looks a bit too long on my build. I would check how you want it to hang on yours and then cut to size.

I picked the US version in Tunisia because I have always enjoyed the campaigns in North Africa and the yellow stars and markings add that extra bit of color. The decals were a bit thick and you can see how that stands out on the hull markings on mine even though I used Micro Set and Micro Sol. The yellow markings on the turret are a bit translucent. I tried painting over them in yellow but didn’t want to try and paint the star so stopped.

I used a Tamiya rattle can for the main OD and their paints for the details and tracks.

Another very nice kit from Tamiya which will make me build a few more of their tanks I have in the stash.

Thanks to Tamiya and IPMS/USA for the review kit and the decal sheet.