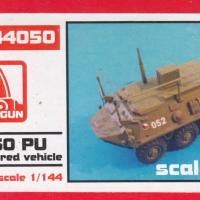 The BTR-60 series was developed in the late 1950s to make the Soviet Infantry motorized, allowing the troops to keep up with the tanks as they advanced. The vehicle is amphibious, with an internal propeller. The BTR-60 series had dozens of versions. The BTR-60PU is the command vehicle version, which explains all those antennas on the top.

The base of the kit is the vehicle chassis. There are several sets of resin parts and one PE fret.

After removing the chassis from the pour block, I painted all the parts with my airbrush. I’ll have to say the color scheme was very easy. One color for everything except the tires and the mirrors. I put the decals on at this point. I removed the wheels from the pour blocks and cleaned up the tread areas. I painted the wheels black, using a brush. Then I put the wheels on the chassis. I tend to start with the larger and less delicate parts first, then go to the finer details as I proceed. Experience has taught me that I WILL knock small parts off while doing large assemblies. I used gel type CA to put the wheels on. They were pretty easy to reattach after I knocked a couple off later in the build. The small resin parts were next, the gas cans (yes gasoline, not diesel) and the headlights. I left that antenna off until much later. I assembled the PE equipment rack which goes on the very back on top of the vehicle. This assembly requires some bending of small and fine PE parts, but I was able to get it pretty well. I followed this with the mirrors, which are quite delicate and were difficult to get to fit. I installed the mirrors and the equipment rack, and put on the climbing steps. Six of the steps go just above the wheels, between the wheels. There are also steps on the sides of the vehicle to provide crew access to the top. These were pretty difficult to install, as there were no locating spots, so getting them straight and keeping them in place was a challenge. The last installation were those big HF antennas on the roof. Each one required a 90 degree bend for each of the 3 legs plus a 90 degree bend of the antenna, just above the middle leg of each one. I actually had far less trouble with these PE parts than any of the others. Once I got the bends pretty close, I was able to attach the middle leg at the point where the antenna bent. This was also easier because there was an attachment point. I then used a tool I bought at an IPMS Convention several years ago called the Glue Looper. This tool allowed me to get the part in place, then apply a tiny spot of liquid CA between the antenna leg and the attachment point. I was then able to work one end of the antenna to its attachment point and glue it in place. Then the third, using the same method. I then put on that vertical antenna, and the project was finished.

Recommended. The PE parts for the steps were a challenge to install and keep in place. Everything else worked nicely.

Many thanks to Brengun for the kit, and to IPMS for the chance to do the review, and add to my 1/144 vehicle collection.

As many of you know, Jim passed away in early September. Jim has served IPMS in many capacities. He served as Publications Director on the IPMS EB for a number of years. Jim was a welcomed participant at a number of recent National Conventions, working at the Registration Station, as well as entering some of his classic 1/144th scale models.

Jim worked as a member of the Reviewer Corps and this review will be his final submission.