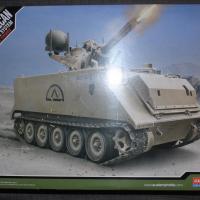 The M113 is a long serving fully tracked APC that was first fielded in Vietnam by the US Army in 1962. It has long been replaced by the M2 and M3 Bradley in front line roles but this versatile chassis still has a number of units in service in support roles. One of the most interesting uses of this chassis is the M163 Vulcan Air Defense System or VADS. This marries the M113 to the M168 rotary cannon, which is a variant of the 20MM M61. This new injection molded kit from Academy is one among previously released versions of the M113 chassis. It is an oldie yet goodie chassis with some new sprues that to add the parts for the M163 variant.

The original boxing for the Academy is from the mid 1990s and the kit design is showing its age a little. Unlike most modern kits, it doesn’t include a clear sprue for vision blocks/lenses and the vinyl tracks can’t be glued by normal modeling glue. However these are very minor issues. The kit has very little to no flash and no warped parts in my example, which is great for a kit of this age. The small box is packed with 9 light tan sprues for main parts, 2 small black sprues for individual track links, a vinyl sprue for ammo belts, a photo etch fret, poly caps, and vinyl tracks. Nearly everything is nicely molded with the only noted issue being with the individual links for the tracks. They have either a small molding issue on every pad or a small ejection mark, but it is on nearly every pad and would require a lot of sanding/filling to correct.

The construction starts as with the rear of the hull and here we find the first minor issue with the instructions. In Step One we are given two very different options for how to construct the rear of the hull with no guidance on which version of vehicle to use them for. This is the only time in the instructions that this occurs, so just refer to your references to make sure the option that you choose matches the vehicle that you are building. Moving on from there the construction proceeds with no real issues, the fit of all the parts is still excellent. The parts for the suspension are keyed so setting the height of the suspension arms is very easy.

Moving on the rest of the hull, I skipped from Step 3 to Step 10 to complete the build of the hull prior to building the turret. I had no issues fitting the upper hull or front glacis plate to the main hull. All of the hatches fit really well, although the only hatch that you can pose as open would be the main hatch part D5. My only real issue with this step is that they call out using a bunch of extra stowage with no clarity with where they should go. Before going back to work on the turret and tracks I recommend finishing the upper hull by completing Step 5 and most of Step 12. I had one issue with Step 5, part D28 does not fit under the large armor pieces that are added to the front hatch in Step 12. So I ended up removing it. My only other comment on the hull assembly is that the locations of K1 and K2 are fairly vague. There are no location marks and the instructions aren’t clear, so refer to your references for exact placement.

Finally the turret assembly starts with the rotary cannon. The assembly for this is very clever but be careful when gluing the barrels together as it is very easy to fill in the spaces in between the barrels. I left the ammo belts off of the cannon until everything was painted. The instructions provide no color callouts for anything on the cannon, so I undercoated with NATO black with an over coat of Metallic Grey for the barrel and breach. I hand painted parts of Y1 with Brass to represent shell casings.

I also assembled the parts from Step 7 separate for painting but I left J16 and J17/J25 off until final assembly. There are no color callouts for this assembly either, so I assumed everything would be NATO Green with chrome for the extended actuators. The assembly of the turret in Step 8 is very tricky. I assembled the full turret without first installing the cannon and the gunner seat to make painting easier and test the fits of the major components. However the cannon will not fit into the turret if you do this. The base of the mount is too large, so I trimmed a couple of the rear corners of the base so it would clear part K6. It was still a very tight fit and a difficult assembly but I got it in.

The last part of the assembly was cleaning up some details. Installing the radar in Step 10 was very smooth but I left the radome off for painting and installed it during final assembly. There is no color callout for the dome itself so I picked a Medium Grey to make it stand out a little. Lastly, I worked on the tracks, as stated above the individual links all had molding issues so I used the vinyl option. The vinyl tracks are well detailed and are a good length. My only issue is that they are older tracks so they either need to be melted together or super glued. I would recommend melting them together carefully as I had some issues with super glue holding.

The painting guide provides three schemes one standard NATO camouflage, one for Desert Storm and one in overall NATO Green. The instructions do have a very nice chart covering a large number of paint manufactures for color matches but I used the Tamiya range of premixed NATO colors for all of the main colors. As the vision blocks and headlights are all molded solid I used Chrome covered in Tamiya Clear Blue to represent glass. Lastly I applied the decals over a thin coating of wet Future. The decals are well printed and the register is good. Nothing of the underlying paint shows through the white. They went down well with no silvering and no need for decal solvent. My only comment is that decals 13/14 are bit large and should be trimmed shortly after setting them with a sharp knife.

Overall this is a great little kit. It builds up very quickly and fits really well. It seems to be fairly accurate and is a relaxing, easy build. I really enjoyed working on this kit and I recommend it for anyone that likes modern military vehicles that is looking for a straight forward build of an interesting subject. My thanks to MRC and IPMS for giving me the opportunity to review this kit.