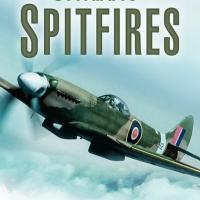 Peter Caygill is one of Britain's leading aviation history authors. His meticulous research and personal interviews with ex-pilots and aircrew have lead to the publication of many successful books such as Jet Jockeys, Spitfire Mk V in Action and Lightning from the Cockpit. He lives in Darlington, Co. Durham.

The Spitfire is probably Britain's best loved and admired aeroplane. It is also revered around the world. This book looks at the later marques that were modified for various special tasks and differed to a large degree from Supermarine's first early versions that saw action in the early days of World War II. New and more powerful Rolls-Royce engines replaced the well-tried Merlin, but increased the aircrafts performance in terms of speed and operational altitude. Subtle changes to wing design also increased the manoeuvrability and capability of these spectacular models that survived in the operational role until superseded by the introduction of jet-powered flight. The content explains the design details, development and flight testing of twelve models and also contains their operational roles and history. Lengthy appendices will include Griffon-powered Spitfire aces, V1 rocket destruction aces, Griffon-powered Spitfire losses and where the survivors can be found

This publication is broken down into three parts: Part One addresses the design, development and technical side of each Spitfire variant; the center part is the images section, Part Two addresses the use and history of each type. I found the first part to be a bit dry, while offering loads of technical information.

The center section of this publication is filled with black-and-white vintage images of Spitfires in flight and on the ground. All are captioned. All of the images represent original, and not restored, aircraft. The images are reasonably clear and will offer the modeler some detail and weathered effects of aircraft in use.

Part Two has the action during World War II against axis aircraft and the V-1.

Part One Development and Flight Testing

For the scale modeler there is an abundance of model Spitfire kits by many manufactures in several scales to pick from, as well as marking choices and aftermarket accessories. I planned to list some of the later marks that are available, but became overwhelmed by the choices. The first few chapters of this publication that cover the various marks are a bit of a slow read, but do offer a good deal of technical information on the issues and problems encountered during the development of each variant.

If you have an interest in the design, development and combat history of the Spitfire, this publication will be of great interest and make a fine addition to your library. Recommended for the Spitfire enthusiast.

I wish to thank IPMS/USA and Pen and Sword Aviation for the opportunity to review this publication.