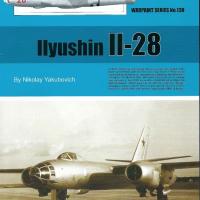 Nikolay Yakubovich is an aviation engineer and aviation historian in Russia. He has written at least seventeen monographs focusing on Russian aircraft since 2001. These include a Russian hardcover monograph on the Tupolev Tu-16, published on January 1, 2001 all the way to 2019’s Guideline Warpaint 124 on the Mikoyan-Gurevich MiG-17. Publishers include Wydawnictwo Militaria, Tseyhgauz, Eksmo Yauza, and of course, Guideline.

Nikolay Yakubovich starts off with coverage of the Myasishchev RB-17 concept jet bomber followed by the Ilyushin Il-22 which flew on 24-July-1947. The British obliged the Soviet Union by selling them Nene and Derwent turbojet engines off of the production line. Of course, this solved the technology gap that Russian designers were struggling with. In no time at all, the Russians were manufacturing both turbojet engines, suitably modified to Soviet design requirements. The Rolls Royce Nene [which became the RD-45F] found itself in the prototype Ilyushin Il-28 prototype. First flight was achieved on July 8, 1948; proving to be a well-balanced aircraft and able to maintain level flight on one engine. Development and variants are covered next. Page 16 shows the training variant, the Ilyushin Il-28U, assigned the NATO code name ‘Mascot’. Here the nose was converted to an instructor’s cockpit that contained an abbreviated instrument panel. A variant of the Il-28 (NATO code named ‘Beagle’] was the Ilyushin Il-28T. Three different torpedo variations are depicted on Page 23 that show off the external mounts utilized. The Il-28T was actually slightly longer than the standard Il-28 bomber variant to accommodate a longer bomb bay to house two small or one large torpedo internally.

Operational service use is addressed next in the Soviet Air Force, Soviet Naval Aviation, and Soviet Civil Aviation (Aeroflot). Foreign Service is also addressed with some of the different Air Forces shown on Page 35 depicting Beagles of the Hungarian Air Force, the Polish Air Force, the Afghanistan Air Force, the Chinese PLA Air Force, and the Egyptian Air Force. You will also find tidbits on nineteen additional Air Forces where the Il-28 served as well. Interestingly, the Chinese variant, the Harbin H-5, is still in service with North Korea where nearly 80 aircraft remain active. The technical description chapter [Page 58] includes 22 photographs from an operation manual that depicts the airframe internals, landing gear, and cockpit. The chapter ‘Il-28 In Detail’ shows off color photographs of a Il-28 on display at the Central Armed Forces Museum in Monino, Russia. The Chapters include:

I found a lot of interesting sections, but the Il-28Sh caught my attention. I was aware of this variant’s existence, but I was pleased that Nikolay Yakubovich was able to flesh out some of the details. The Ilyushin Il-28Sh was a dedicated ground attack variant. Several ideas were attempted, including mounting in the internal bomb bay, but problems with that setup led to installing rocket pods on twelve hard points externally under the wings. These hard points could handle rocket pods, gun pods, cluster bombs, etc. Operations apparently were top secret, but the author refers to one rumor that circulated among aviators, was that you could fire the rocket pods once, but only once. Its probable that another factor was the lack of sufficient armor plating to protect the crew from low level activities, but whatever reason, additional testing data has not been released.

I was able to read this monograph over four days. The text is well supplemented with very clear photographs and captions. Andrey Yurgenson provides well executed color side profiles and the 1/72 line drawings. This is an nice reference on the Ilyushin Il-28 and would be a handy addition to your reference library. Whether you are building the 1/100, 1/72, or 1/48 scale model kits, I would consider this edition essential as an aide to your build. There are also no shortage of decals, photo-etch, and resin bits to detail your kit, especially in 1/72 scale. Bobcat has a beautiful 1/48 kit of the torpedo version (Il-28T) that is currently available. It does include two different external mount torpedoes and one large torpedo for bomb bay mounting, but it does not appear to have the parts for the bomber or reconnaissance variants. HPH Models offers a 1/48 resin Il-28 Beagle and Combat Models offers a 1/48 Vacuform if you are looking for more of a challenge. One has more options in 1/72, with Trumpeter delivering the newest tool in 1999 [Airfix has a 1/72 kit that was tooled in 1968]. Tamiya has done a nice Il-28 in 1/100 scale, but this tool dates back to 1970. If you own any of the previous releases in the Warpaint series, you know what you are getting. If this is your initial entry into this series, you will be quite pleased.