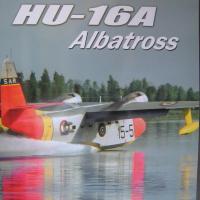 This book tells the story of the Grumman SA-16A Amphibian as used by the Italian Air Force after World War II. It is NOT a study of all users of the type, as the Wayne Mutza book on the Albatross, published by Shiffer in 1996, was. This book gives a very brief account of the service life of the plane, and then shifts to Italian service exclusively. It therefore fills a gap, as Mutza’s book has very little coverage of Italian service.

One feature of the book is that the text is printed side-by-side in Italian and English, but the typeset is different, which I thought made the English text a little harder to read. Another problem is that the translation from Italian to English is a little bit strange grammatically, as words like “aircrafts” appear frequently. But it is understandable, and there is a lot of information in this book that is not available elsewhere.

The photographs of the planes in their different marking systems and well presented, and my impression is that the writers were modelers, attempting to provide information for people wishing to build a model of the type. The only problem here is that they only mention one model of the type, the 1/48 scale issue by Trumpeter, whereas most American modelers are probably more familiar with the old Monogram 1/72 scale kit first issued in 1957 and later in 1984. Although really an antique kit, it apparently does build up into an acceptable model, although the Trumpeter kit may better represent the version used by the Italian military. All in all, the book is an excellent source of information on Italian SA-16A’s. I have not seen the Trumpeter kit, as I do not build in that scale, but I do have a Monogram kit, but haven’t yet built it. It looks pretty good in the box, considering its age.

The Albatross is still around today, and we have three of them stored on civilian airports in the West Phoenix area. None has flown recently, but they are interesting to see and photograph. They will always remain a classic.

The book provides a detailed coverage of the service life of the Albatross, with brief coverage of the original aircraft, and extensive coverage of the Italian version. The photos are very well produced, with about 30 photos of American types, and almost 100 pictures of SA-16’s in Italian service. There is no shortage of interior views, and some coverage of the completed Trumpeter model. There is a lot of material on the history of the marking systems used on the type, and good explanations of how the planes were used in service. Most of the pictures are in color, and in addition, there is one page of color side view profiles showing the basic marking variations. In addition, some of the photos show ground crews loading and working around the types, showing their uniforms and the ground equipment they used.

One section that I thought was particularly impressive was the part that explained how the Italian Rescue units used the planes for civilian air-sea rescue under the direction of the ICAO (International Civil Aviation Organization) which standardized procedures for greater efficiency. They also discuss how the SA-16 replaced previous types in Italian service, notably the Cant. Z.501 and Z.506 rescue aircraft. These dated back to World War II, and were out of production by 1946. The first SA-16’s reached the Italians by 1958, and they continued in service until replaced primarily by helicopters in the 1970’s. Currently, no SA-16’s have been preserved in Italy, although many are still in existence throughout the world. I will include a few photos of surviving aircraft, as I have photographed a lot of them.

Although the book mainly covers the use of the SA-16 Albatross in Italian service, it is certainly a book worth getting for your library. The price is right, and it makes for very interesting reading. Don’t miss out on this one. I high recommend it.

Thanks to Casemate and Aviation Collectables for the review copy. Thanks also to Phil Peterson and Bill O’Malley of IPMS USA for allowing me to do the review. Now I can get back to modeling. Maybe an SA-16?

Picture from Show
Previous Next