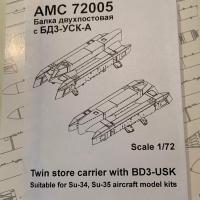 This set is designed to be used on Su-34s and Su-35s and should fit either Trumpeter Hasegawa’s kits. The set consists of 18 resin parts which allows you to assemble a pair of the twin store carriers and provides the parts for either configuring the rails for either bombs or rocket launchers.

The parts are cast in grey resin which is of medium hardness which is easily cut with a razor saw or a sharp Xacto blade and sands easily. After washing the parts to remove any casting residue, I used a fine razor saw to separate the parts from the casting blocks. The instructions clearly show where to cut the parts off of the casting block and the resin spacers that between the side rail mounts and the center part of the upper pylons. I then used a 400-grit sanding stick to clean up the edges.

As the configuration of the sway braces and the ejector feet on the carrier rails depends on whether you are going to mount bombs or rocket launchers, you need to decide what you are going to mount on the rails next as it is much easier to install the sway braces and ejector feet on the rails before they are attached to the mounting pylon. As I anticipate using this set on an Su-34, I opted for the bomb carrying configuration. Pay close attention to the orientation of the sway braces in the instructions as I managed to install one of them backwards and did not notice it until the superglue had set. There are instructions on painting as it will depend on the paint scheme of the aircraft you are mounting them on. In addition, the set does not include any decals, so you will need to source them from your kit or an aftermarket set

This set is a nice set and I really like the resin used by Advanced Modeling as it made it easy to separate the parts from the casting blocks and cleaning up the parts once separated. Now I have to break out my Su-34 kit and get going on it so I can mount these and bomb them up.