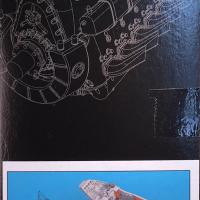 Last summer Eduard released its much anticipated MiG-21MF kit in 1/72 scale. The initial release (the “Interceptor” version) represented aircraft manufactured at the Gorky factory. The second release was for MF’s manufactured earlier at other factories (the “Fighter Bomber” version). As with the Interceptor kit, in conjunction with the release of Fighter Bomber kit, Eduard also released a separate resin cockpit set for the earlier model MiG-21MFs.

Construction starts with painting the ejection seat and the separate headrest. Eduard’s color key references Mr. Hobby/Mr. Color paints, but as these are not common where I live, I used an online paint conversion chart and the “eyeball” method to convert the colors to Tamiya paints as I have a decent supply of these colors. The base color for the bulk of the seat is Neutral Gray with Light Gray for the headrest, seat cushions, and a few details. I used XF-66 for the Neutral Gray and XF-25 for the Light Gray. I used a black tempera paint wash to bring out the quilted detail in the seat cushions. After the paint had dried, I sprayed a coat of clear flat to seal everything then added the photo-etch seatbelts and the ejection handle. The ejection handle needs to be bent slightly so that it forms a wide “V” shape when viewed from above. I then set the seat aside to be added during final assembly.

The next step is to paint the cockpit tub. The instructions advise you to paint the cockpit Mr. Color H-46 Emerald Green, however, this color looks much to green to me, so I experimented with a custom mix of 5 parts Tamiya X-14 Sky to 1 part Tamiya X-25 Clear Green which turned out to be pretty close to the color Eduard used on the color photo-etch sheet. I used this color for the main cockpit, the rear bulkhead, the instrument panel, and the cockpit coaming. After this had dried, I dry-brushed the side consoles black and gray to bring them to life. I also dry-brushed the details on the cockpit sides, but as the cockpit curves inward, access is a bit difficult, so use a small brush and take your time. I then added the photo-etch panels and levers to the cockpit sides and the rudder pedal straps.

The instrument panel is made up of several layers of photo-etch, but before these are added, be sure to paint the radar screen housing flat black as it protrudes through the completed panel. I added a drop of clear green on top of the black to simulate the color of a powered down aircraft. After the panel was completely dry, I put a drop of Future in each dial to simulate the instrument glass.

The set includes a resin control stick with a photo-etch paddle (nose wheel steering?), but I left this part off as it cannot be seen.

The cockpit’s rear bulkhead is very nicely detailed, and the instructions have a good illustration on how to paint the details on the bulkhead, even though much of this work will not be seen once the ejection seat has been added. I also looked at some online photos and took a little artistic license to add some color to the bulkhead and make the beautiful casting stand out.

The casting on the instrument panel shroud is exquisite and careful painting will really make the detail pop. When painting be careful around the tiny mounts for the heads-up glass as they are easily broken or bent. I used a drop of Testors Chrome Silver to represent the lens of the heads-up display projector to make it stand out. Once everything was dry, I cut out and attached one of the acetate heads-up glass parts – take your time and check your alignment from both the side and the front – mine ended up looking good from the side, but leans to the left when viewed from above.

Like the Interceptor cockpit set, the instructions for this set do not provide any information on where to cut the kit parts in order to install the completed resin set inside the fuselage. When I installed the resin Interceptor set in one of the Interceptors I built last fall, I ended up attaching the forward cockpit bulkhead (D63) and then cutting D69 just aft of D63 as my best guess of where these parts meet. I then attached the remainder of D69 to the left side of the kit fuselage and once it was set I test fit the resin cockpit and attempted to close the fuselage halves. I recommend doing a couple of trials runs to ensure everything fits correctly as last time I was either off a little in my alignment or the rear bulkhead is a little too big as the fuselage halves did not quite close. I had to lightly sanded the edges of the rear bulkhead and do a couple of test fits until the fuselages met top and bottom. Before cementing everything together, be sure to check the fit of the fuselage spine at this time to see if any other modifications need to be made in order to get the spine to sit correctly. I am not quite ready to put the fuselage together on my Fighter Bomber, so I am still waiting to see if I have the same issues.

This is a nice set from Eduard and lets you really go to town in detailing the cockpit area. My only real concern is the lack of any information on where to cut the kit cockpit/nose wheel well part in order to fit the new cockpit. The difficulty I had in painting the sidewalls is due more to my shortcomings than this set.