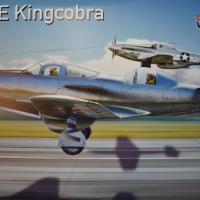 An entirely different two-seater was produced by the Bell company for internal use. Two P63E-1s were modified by Bell with a separate observer seat in the rear fuselage, located behind the engine mounted under a separate canopy. A probe was mounted which extended through the spinner, and to make space for the observer the radio equipment had to be moved forward into the armament bay. The aircraft carried the civilian registrations NX41963 and NX41964.

Included in the instructions is a drawing for paint and decal applications for either of two aircraft. Both were for the civil aviation models.

Contained in the box were eight different model part sprues molded in light grey. Panel lines were very crisp and scale like. The fuselage has a number of inscribed panel lines and access hatches. Detailing of the parts was very nice and crisp. The upper wing portions left and right had what appeared to be light “stress” marks on each ¼ the distance inboard from the wing tips. Those marks were the only flaws I saw in the molding of the parts. The situation will be easily fixed with light sanding once the wing portions are attached to the bottom section of the wing.

One sheet of PE is included with the kit. The PE parts are for the seatbelts, various parts of the seat frame, control levers and exhaust pipe shields.

There were two clear sprues for the canopy parts. The two cockpit entry doors were included on one of the clear sprues and the doors were to be added in step 48 of the instructions. The doors had nicely inscribed details on the inside of both.

The kit came with masks for both canopies and doors. The masks were printed on some light grey material that I thought was easier to see than parts of other masks I have used printed in yellow.

The sheet is printed by Dora Wings and is not very extensive. There was not much in the way of markings with this aircraft (registration numbers and a wing stripe in black the length of the wing) and included some stencils.

Bonus, with this kit you get two cockpits to detail and paint. The instrument panel has raised lines to indicate the instrument locations. They are good enough that if you wanted to paint the panel and come back with a dry brush method to make them stand out it would be acceptable or you have the option to use the supplied decals to cover the panel. There are a few PE control levers to install and map cases. The seats have framing and adding the supplied PE seatbelts gives the cockpit area so nice detail.

Because of the design of the aircraft, there is no engine in the traditional area where you would expect to find one. The nose was open to allow for some nose weight to keep the model from sitting on its tail. I used 18 grams of weight to even out the balance of the model and keep it from becoming a tail sitter.

The front wheel well is created by five pieces, the front, rear and sides and nose gear strut. The sides of the well line up with the fuselage when the halves come together it can be a tricky endeavor to get them just right. By that I mean when the wheel well is being assembled the front landing gear strut is also attached via holes in the front portion of the well side panels (a total of 5 parts to align).

I painted the wheel well with Mission Models interior green and then gave it a wash with Tamiya Dark Brown panel liner.

Included in the model are inserts for the wheel wells for the main landing gear. There is some detail that was brought out with Tamiya panel liner after I sprayed with Mission Models Interior Green.

As the fuselage came together I had to work from the aft end to the front. I taped the whole fuse together and glued the seams. The tricky part of the assembly was the need to line up two cockpit sections and get them straight, I managed to get the fuse together but needed some C/A filler on the bottom seam from the tail to where the wing meets the fuselage (see construction notes about mixing and using C/A and Talc for a filler).

When joining the fuselage to the wing, I had to trim part E25 which is the aft end of the nose wheel well. That part was too long vertically and would not allow the wing on the leading edge to mate with the fuselage. When the wing and fuse were attached I needed more C/A filler on the area where the wing trailing edge and the fuse mated together.

When sanding the C/A filler a diamond impregnated small file makes short work of rough smoothing. The area can then be sanded after with progressively finer sandpaper.

One other part I had to file down was part #14, it is the part of the firewall that the aft cockpit instrument panel is attached to. The part was too high to attach a part of the upper fuselage between cockpits.

Before I applied the kit supplied canopy masks, I cleaned the clear parts and dipped them into a 50/50 mix of Mission Models Gloss Clear and Mission Models Paint Thinner, I let those parts for 48 hours.

The aircraft has two canopy types, the rear was straightforward with the sliding portion of the rear part of the canopy attaching to the front windscreen typical of most models.

The front canopy was a bit complicated, there were four working parts to get a good fit, the front windscreen, the rear overhead canopy and the two doors. First, the inside of the cockpit doors needs to be painted. I masked off the inside windows with Vallejo Liquid Mask and tape, then painted the rest of the door with Mission Models Paint Interior Green. When that dried I removed the inside window mask. The other two parts of the canopy were the forward and rear overhead portions and when complete, all were lined up together with the doors. The instructions showed gluing the forward and rear portions to the fuselage then adding the doors. I found some difficulty lining up the doors with the established canopy. My suggestion is to mount the doors first and then build the forward and rear canopy pieces over the doors to get a better fit. Or, build the model with the doors open.

Before I apply any paint, I wipe the model them down with Denatured Alcohol made by Crown (the “Cleans Glass” type, not the one labeled “Fuel”) to remove dirt and grease.

The canopy masks went on very easily and fit the appropriate areas they were applied making it easy to paint the frames of the canopy.

I decided to prime the model with Mission Models white 60%, mixed with a poly10 mix 40% and 6 drops of Liquitex Slow Dry. Once the primer dried for 24 hours, I gently buffed the primer with a wet 4000 grit finishing sponge to smooth the surface.

The anti-glare section of the forward fuselage and the wing walk areas were painted with a mixture of Mission Models Black and Mission Tire Black.

Once the paint dried for 24 hours I sprayed the model with two coats of Alclad Aqua Gloss and let that dry for another 24 hours to give the decals a nice surface to stick to.

The struts of the landing gear were sprayed with Tamiya titanium silver attached to a paint block of wood with Sticky putty. I then weathered with Tamiya dark brown panel liner.

Tires for the aircraft were sprayed with Mission Models Paint Tire Black and weathered with gray dust Pigments by Vallejo.

Before applying the decals, I make sure I have sprayed at least 2 coats of a clear gloss coat on the model and let it dry for 24 hours, on this project l used Alclad Aqua Gloss. When all the decals are applied I then sprayed the model with three more gloss coats to help blend the decals with the rest of the model’s surface.

I used Micro Sol and Set for decal setting solutions.

After the decals were applied, I sprayed three more coats of Alclad Aqua gloss to blend the edges of the decals and let dry for 24 hours.

The product is made by Crown and is labeled as “Cleans Glass” (purchased at LOWES hardware) for cleaning and degreasing the model prior to painting. I have found when the model is cleaned with this product the Mission Models Primer I use will not pull up when removing Tamiya masking tape.

The filler is made by pouring a small amount of Talcum powder (using Talc allows the area to be re-scribed if necessary) into a mound and then adding as many drops of C/A to mix them into a paste. I then take that paste and apply usually to a joint seam. Once I have the paste smoothed out I will add C/A accelerator to harden the mix. I wait a few minutes for it to harden then, file the area with a diamond file to make it smooth.

The Mission Models paints were diluted with 60% paint and 40% thinner/ poly mix. The thinner/poly mix was made up of 10% Mission polyurethane and 90% Mission thinner (10% polymix)

I apply the putty to an area (usually a joint) then come back and smooth the area with a damp “Q tip” cotton bud. I normally add about three layers to fill the joint because of shrinkage, when complete there is no need for sanding.

Blue Tak or the like sometimes referred to poster putty. I will use this to either hold small parts on a building board allowing the parts to be moved to different angles or roll into little worms to mask borders of different paint.

I will use a building board with sticky putty to hold small parts for painting or a fuselage when masking a canopy allowing me to use both hands. The board allows the parts to be turned to different areas to be inspected or painted.

During construction, other than the two items that needed to be filed down for fit purposes and the cockpit door alignment, they were the only areas that needed extra work.

The TP-63 is a unique aircraft to build and add to your model collection.

Thank you to Dora Wings and IPMS/USA for the opportunity to review this model.