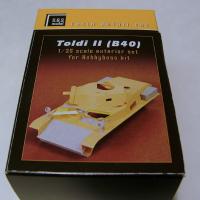 Toldi tanks entered Hungarian service about 1940. They were used by the Hungarian Army against Yugoslavia in 1941. They were mostly used against the U.S.S.R. between 1941 and 1944. The primary role was reconnaissance due to their light armor and good communications equipment. They were not effective against the Soviet T-34 when they encountered them in operation Barbarossa.

The Toldi II tanks were almost identical to the late Toldi I tanks. They were both built from parts manufactured exclusively in Hungary. Helping to solve the issues with German supply to the Hungarian army’s satisfaction. The radio was improved, upgrading from the type R-5 to R-5a. By the end of 1941, the Hungarian army had approximately 190 Toldi I and Toldi II tanks. One way to distinguish them was the old frame antenna used on the Toldi I tank and a new straight antenna used on the Toldi II. Eventually this feature disappeared as well due to the continuous upgrades of the radios to the R-5a.

I recently had reviewed the SBS Model Toldi I update and was pleasantly surprised. I can say this was again a pleasant surprise when I open the box ! Just like the Toldi I upgrade I was found one small bag of resin parts, one small bag with photo etch parts, a die cut clear plastic sheet used for the headlights and the instruction sheet. The fact that they included die cut headlight lenses was impressive to me.

All of the parts are molded in a grey/green resin and are crisp, very well molded and have excellent detail.

There are two replacement mufflers that look excellent and will greatly improve the model when installed. There are two resin tool boxes for the fenders which are nicely molded with gorgeous latches and detail. There are detail parts which almost completely replace the entire front armor of the model, including the driver's compartment. This also includes the nifty set to completely replace the front driver's hatch that was in the Toldi I upgrade. There are new headlights, horn and a grill for the rear underside of the tank.

The instruction sheet is fantastic. The drawings are clear and you will have no trouble understanding the instructions. Kudos to SBS !

All in all, this set is a great value and I am looking forward to and I will definitely be using one on my Toldi when I get to building it. As a matter of fact, SBS also makes other upgrades for the Toldi series tanks including a great looking set of wheels which I have ordered. I also recently purchased some beautiful metal gun barrels. If you cannot find the products locally, you can order them very easily directly from the SBS website.