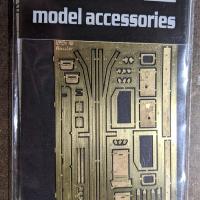 This set consists of one photoetch fret with parts to detail and/or replace kit parts on Emhar’s 1/72 British Mark IV Male tank. Mainly they are replacement parts for the kit’s un-ditching beam rails, some detail parts for that beam, replacement sponson doors, pistol port covers and parts to enable the modeler to open up the driver’s and commander’s vision ports. There’s also a piece to replace the roof top storage bin.

The modeler would benefit from some PE folding experience, especially where the new un-ditching beam rails are concerned, as the folds are long and the pieces quite thin. The instructions for the sponson door parts leave out that you need to cut off the lower part of the kit part and glue it in place as it represents the part of the sponson below the door and the replacement parts do not take this into account. If you follow the instructions, there will be a large opening below the door. The benefit of these parts is that you can pose the sponson doors open as an interior part is supplied for the door. However, as the kit has no interior to speak of, the modeler will need to add something to the inside of the sponsons themselves.

The replacement roof stowage bin will not sit quite right as its bottom is straight whereas the surface to which it is to be attached has a slight angle to it, so some carving into the kit part is necessary to get it to sit correctly. The new visors over the commander’s and driver’s vision ports are nicely done and consist of two parts, the main visor and the vision slit cover, but care needs to be taken in removing the ones from the kit part so as not to lose other detail. The beam rails are very fiddly to deal with and are in two pieces, which makes them even fiddlier. The modeler should take a good look at the kit parts, which are actually nicely done, and decide whether these parts are worth the effort. If you thin the kit parts down, I think not.

There are a whole bunch of new covers for the pistol ports located around the vehicle. The instructions do not tell the modeler to remover the kit parts, which are molded in and a little “mushy”, so the assumption is you just put the PE parts on top of the kit ones. The gain in detail is minimal, but they are easy to apply at least. The un-ditching beam’s parts consist of two plates for the top and bottom and two straps for the end. There is no kit part to put these on, so the modeler has to make it himself, and while not a difficult job it’s a bit fiddly as the beam is not square, but rather a trapezoid, in cross section. I added the eye bolts and chain from my stocks.

I posed the tank with one sponson door open and one not, the driver’s visor open all the way and the commander’s vision flap open, but his main visor closed. You can see from the photos the differences/benefits of the PE parts and how they look in place and painted. They do add some interest to the vehicle but take a bit of effort to get them in place and in some cases aren’t much better than the kit parts.

I’d like to thank IPMS/USA and Hauler for the sample and the chance to take a look at this small scale option.