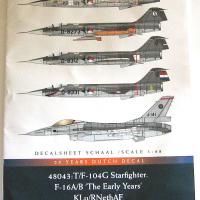 This comprehensive decal sheet covers nine F-104Gs, four TF-104Gs, and twelve F-16As. A couple of the F-16 schemes are for the same aircraft serving with different squadrons, so although the serial number on the tail is the same, the squadron badge is different. The title of the sheet indicates that it contains markings for both the F-16A and B, but there are no F-16B aircraft depicted in the instructions. Color density and registration appears to be very good. A full set of stencils is provided for the F-104 and a four-view drawing is included to aid in placement. There are no stencils provided for the F-16s. The recommended kits are the Hasegawa (F-104, TF-104, F-16) and Kinetic (F-16) offerings, so F-16 stencils should be available from those kits.

The markings offered are:

The instructions are printed in color, which is a nice touch. There are top and bottom views for the F-104, but not for the F-16. There are plenty of available references either in book form or online, so that shouldn’t be a problem for the average modeler. Paint colors are given in RAL numbers and FS numbers where appropriate. The F-104 and TF-104 options are either overall grey or camouflaged. The F-16 options are all in the standard three color grey scheme.

I had a Hasegawa TF-104G (kit #PT40) in my stash, so I decided to use that kit to review the decals. The kit is up to Hasegawa’s usual high standards, with finely engraved panel lines and great detail. I had a few minor fit issues during construction, but nothing that couldn’t be solved with a little test-fitting, sanding, clamping, and patience.

Rather than just do one of the overall grey aircraft, I chose to do a camouflaged bird. It would have been easier to do the overall grey scheme, but I wanted to see how opaque the white portions of the national insignia were, and I also thought the camouflage scheme was much more visually interesting. I used a combination of the Dutch Decals instructions, the Hasegawa kit instructions, and artistic license to come up with the colors. The decal instructions sheet lists RAL and FS numbers. The color listed for the upper surface dark green is RAL 56014. I could not find that color listed in any of the color charts that I found on the internet, so I used RLM 71, which is what was called for in the kit instructions. Also, I substituted FS 34095 for the anti-glare panel on the nose because I thought FS 34102 was a little too bright.

Once the kit was constructed, painted and a coat of Future was applied, it was time to start the decaling process. Whenever I use decals from a manufacturer that I am not familiar with, I like to do a test run on an old ICM P-51 fuselage that I have lying around. I choose one of the decals that I am not planning on ever using; in this case one of the F-16 tail markings. I almost always use Micro Set and Sol, and the test decal snuggled down nicely, so it was on to the real thing.

I decided to start with the underside of the aircraft, and went to work on the stencils. As with most jets, there are a bunch of these. They are clearly marked on the instructions and I was moving right along until I got to decal number 63. The decal sheet has two different stencils marked as 63. A closer look at the instructions showed that the four black dots in the shape of a diamond should be decal number 65, not 63. About the only other issue I encountered was the misspelling of the word “access” on the decal that goes on the hatch under the nose. The decal only has one “s”. I hope the judges don’t ding me for that!

Application of the decals was easy and proceeded without incident. The decals are rugged and were able to withstand my manhandling. There was plenty of working time before they became unmovable. As I mentioned before, all the decals snuggled down nicely into the surface detail with Micro Set and Sol. I did not experience any silvering, which is unusual for me. I don’t know if that is a testimony to the quality of the decals or if I just got lucky, but I’m guessing it was the former.

All in all, this is a good product with plenty of options provided for the price. I would definitely recommend this sheet to anyone interested in the subjects. I feel the instructions could have been a little more helpful, but there is plenty of reference material out there on F-104s and F-16s. As a matter of fact, I came upon a nice website called Harry’s Lockheed F-104 Starfighter Site which has a lot of photos of Dutch Starfighters.

I would like to thank Dutch Decals for the opportunity to review this fine decal sheet.