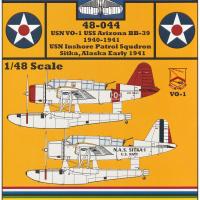 As one might guess from the company’s name, Yellow-Wings Decals specializes in decals for American military aircraft from the period when they sported some very colorful markings.

Sheet 48-044 titled: “USN OS2U Kingfisher, VO-1 USS Arizona BB-39, Inshore Patrol Squadron, Sitka Alaska” provides marking for two colorful Kingfishers. The sheet is intended for the Monogram Kingfisher 1/48th scale kit. The kit is no longer in production but is not expensive or hard to find on ebay or at swap-meets. The Yellow-Wings artwork recommends the “Kitty Hawk OS2U Kingfisher” but this is a 1/32nd scale kit and won’t work with these decals. The decal sheet provides enough markings to build two complete models: one from VO-1 of the USS Arizona, and one stationed in Sitka Alaska. The instructions include a list of recommended model paints to match the colors used on pre-war U.S. aircraft.

The decals are printed by Microscale and have excellent registration. The carrier film is very thin and is very tight to the edge of the color printing. Yellow-Wings provides detailed instructions for decal application. I found the decals to work well on my build. They settled tightly over detail and the carrier film nearly disappears under a clearcoat.

The fuselage band decal for Arizona aircraft is split at the bottom and is slightly longer than needed. This would normally be a good thing as the band would overlap on the bottom of the aircraft. On the Kingfisher however, the rear strut for the float gets in the way of overlapping the decal. I would recommend cutting the decal in half at the top to make application easier.

I would like to thank Yellow-Wings Decals for providing this review sample. For any builder of military aircraft who would like to add a splash of color to their display cabinet, Yellow-wings decals provides some great options.