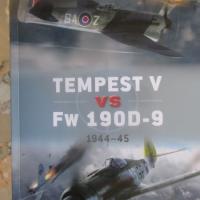 Osprey has published a series of books offering comparisons of competing combat aircraft of World Wars I and II, and they offer specific information on how the planes fared against each other in combat. The author brings out the fact that a combat airplane not only has technological factors to consider, but also the skill and training of the pilots as well as the development of tactics suitable for the combat situation. The best airplane flown by an inexperienced pilot might well be at a great disadvantage against a combat veteran flying a less sophisticated type. With this in mind, the author covers the subject in such a way as to give the reader a very good impression of the factors affecting combat between the types.

In addition, the author brings out the fact that these types also fought against other types, but the emphasis is on the major aircraft in question, in this case the Tempest Mk. V and the Focke Wulf FW-190D-9.

The earlier radial engine FW-190’s were excellent aircraft in their day, but they suffered a loss of performance as they flew higher. Although Kurt Tank, the designer, attempted to improve high altitude performance, this was never done effectively, so the solution was to use a different engine with better high altitude potential. Tank’s idea was to develop a totally new fighter, the TA-152, but the interim solution was to use the Junkers Jumo 213 powered FW-190D-9 until the TA-152, powered by the Daimler Benz DB-603 could be placed in production. The result was a fighter better than the radial powered versions, but everyone looked forward to the TA-152, which was a much better fighter. However, only a small number of FW-190D-9’s reached the Luftwaffe, and only one unit received TA-152H’s, making their contribution minimal.

The British, on the other hand, were producing the Spitfire in numerous versions, while Hawker’s Hurricane was fast becoming obsolete. Complete redesign by Hawker resulted in the Typhoon and Tornado, with vastly improved performance, and a development program which resulted in the Tempest, a much better flying airplane and more effective weapon. The author outlines the development of both fighters very effectively, giving the modeler and enthusiast a good understanding of what was actually going on.

One factor overlooked in most books of this type is the differences in the training programs used to produce combat pilots. Since these were both tailwheel airplanes, they had ferocious handling characteristics on the ground, especially during takeoffs and landings, and from personal experience, I can testify that teaching even experience tricycle gear pilots how to fly a tailwheel airplane can be a very exciting experience. The Allies, British and Americans, had the advantage of secure areas for flight training, while the German flight students were subject to being shot down by Allied fighters when flying from their home bases. Weather was also a factor, and with Allied pilots training in areas like Arizona, where the flying weather is good 95% of the time, training was more efficient than in Germany, where the weather was often unsuitable for any kind of visual flying. That, and the shortage of aviation fuel, resulted in the shortening of the Luftwaffe’s training programs, resulting in less experienced pilots going into combat against an enemy with more flight experience. Some Luftwaffe trainees went into combat in 1945 with less than 50 hours of flight time in any kind of aircraft. Towards the end of the war, this had become a serious problem, especially with the large number of aircraft written off due to takeoff and landing accidents.

The book gives an excellent account of the technical development of both aircraft, along with very useful drawings of the cockpit and armament details of both types. From a modeler’s standpoint, there is not a lot of information on the color schemes and markings of specific aircraft, but this is covered by nearly every other book available on the subject. The advantage of this text is the explaining of why things happened the way they did, and what was really going on behind the scenes. The author uses quotes and interviews of pilots on both sides who survived, explaining their viewpoints.

The author uses diagrams to explain the combat formations used, and the advantages one airplane had over the other. The armament was also a factor, and even such issues as cockpit design and arrangement are discussed. Both types provided the pilot with excellent visibility from the cockpit, although the view directly ahead wasn’t good on either type until the pilot got the tail up.

The book features excellent photographs, many of the people involved, and some very interesting photos that I haven’t seen before, showing the planes in their operational environment. The drawings of the cockpit and armament are well done, and there are some good renderings of combat scenes. There is a lot of information for the modeler as well as anyone interested in the history of the period.

There is no shortage of kits of either of these aircraft, especially in 1/72 scale. Academy, Revell, Heller, Smer, Hobby Boss, and Frog all have issued kits of the Tempest in 1/72 scale. As for the Focke Wulf, , Airfix, Tamiya, Academy. Hobby Boss, Hasegawa, and Italeri have all issued FW-190D-9 kits. Check the reviews on line for recommendations.

This series provides a good comparison of the two basic aircraft types, and how the technology had progressed at that point in the war. Of course, the fact that The Allies were outproducing the Germans at a tremendous pace was another factor that affected the outcome, but even though the Germans had some very sophisticated aircraft at the end, the outcome was already a foregone conclusion, and the technological factors involved were primarily academic. But the book is definitely worthwhile. I have several of these comparison publications, and have found them to be very enlightening in all respects. These books are not expensive, but they are certainly worth getting. Don’t miss out on this one. Highly recommended.

Thanks to Osprey Publishing and John Noack and Phil Peterson for the review copy.