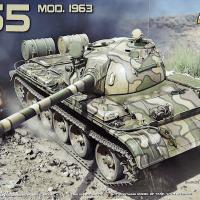 This is part 1 of the review of MiniArt’s T-55 Mod. 1963 Interior Kit. Part 2 will complete the assembly of the turret, tracks, fenders, and the remainder of the kit.

This kit is the first of MiniArt’s T-55 variants and follows their earlier series of T-44/54 Russian tank kits. Following their previous versions, this kit is first released with full interior detailing. MiniArt has also announced a soon to be released IDF Tiran version of the T-55, and a T-55A Late Mod. 1965.

With over 1200 parts, this is an extremely well-detailed kit that is best suited for patient, experienced modelers. MiniArt provides full interior details of the hull, turret, and engine. The drivers' compartment provides some detail, but not as complex as the other areas. There is no detail in the rear compartment for the transmission, oil cooler, fan, etc. There is also no provision for the main fuel tank at the front of the hull. Otherwise, this tank is packed full of extreme detail!

The fit of the parts is exceptional! With just a little bit of fudging, the complex side panels fit to the lower Hall almost perfectly. The upper hull plates for the engine cover and transmission compartment covers all fit extremely well to the side panels. The front glacis plate fits so perfectly that glue is not necessary.

With the fantastic interior detail on this kit. I decided to use cut-outs of the hull decks, fenders, and turret to display the otherwise hidden details. I added some detail in the driver’s compartment, front fuel tanks, and transmission compartment to fill in some gaps in the kit details.

Kit features described by MiniArt (with my comments):

The kit comes in an oversized 9 1/2 x 15 x 4 box laden with 91 sprues in 3 plastic bags, plus the instruction booklet. Inside one of the bags is a smaller bag containing the clear plastic parts, decal sheets, and two photoetch frets. Examining the sprues reveals many, many, very small parts, indicating the fantastic detail provided with this kit. This is not a quick build.

The instructions are an 8 1/2 x 12, 32-page stapled booklet with 104 assembly steps. The instructions include paint numbers from Vallejo, Humbrol, Mr. Color, Testors, AMMO MIG, and generic color names. Detail color call-outs are included in each of the assembly steps. Color paint and marking illustrations are provided for 12 different options in color profile drawings.

Diagrams of each of the plastic sprues, photo etch frets, clear parts and decal sheet helps to identify the location of parts of a large number of sprues. Labeling or indexing helps locate the correct sprue during assembly, as many steps require parts from multiple sprues.

The plastic is relatively soft, which helps with the clean-up and handling of the long, thin, parts. MiniArt uses multiple sprue connections on each part to help with the very fine detail but adds to the clean-up challenges. Examine the parts before removing from the sprues, as some of the connectors are at the end of locating pins. There is some very minor flash on a few parts. Check carefully as MiniArt has cleverly added weld beads on the edges of parts that may appear to be flash.

Assembly begins with the construction of the engine in steps 1 through 8. The engine assembly contains 33 parts. There are some provisions to add ignition wiring and fuel piping in parts Gc22, and the Gc3 cylinder heads, so I added wire based on reference photos. Detail painting instructions are included in the assembly steps.

Steps 11, 12 and 13 install the floor platforms in the bottom of the hull, along with the driver control levers. These steps also install the housings over the idler arms. Careful gluing of the housings to avoid touching the idler arms will aid the workable suspension. At this point, I also applied a touch of liquid cement to the opposite ends of the torsion bars to fix them in place. Once dry, the torsion arms allowed the idler arms to rotate, but only a couple returned to level as well as I had hoped.

More detail in the driver’s area and the ammo shell “wet storage/fuel tank” are added in steps 14 through 17. The wet storage rack is not assembled as a tank but ends up looking like one, except without the top covers. I was going to expose this part of the interior so I added tops to the tanks. The front triangular fuel tank is not included with the kit.

The complexity of the interior is starting to show with lots of parts in very tight spaces, although everything fits very well. The drivers' instrument panel is installed in step 16, but there are no decals for the gauges or painting instructions provided. The instrument panel is called out to be painted black, but reference photos show it to be a silver color and black gauges with white lettering. I added the gauge cases and wiring on the rear of the instrument panel as I plan to expose the driver’s compartment.

Steps 18 through 24 continue assembly of the interior side panels of the hull tub. MiniArt separates the side panels from the bottom of the tub, which makes for easier installation of the numerous details on the sides, but creates some complexity in assembling the side panels to the tub floor. I painted the parts as they were assembled. It is very important to test fit the side panels to the floor of the tub as some adjustments were necessary. Best to get this done before painting the interior of the panels. Steps 18 and 21 show installation of lights to the outside front and back of the hull side panels. These can be installed much later after all the hull top panels are assembled to avoid breaking them off during assembly.

Steps 25 through 30 install the engine mount, more ammunition shells, pump, and additional equipment on the interior of the hull. No real fit issues here but lots of patience to get all of the small parts put together and the shells correctly anchored. Step 29 assembles what appears to be another periscope, consisting of many small pieces, and the fit is not very precise. It would’ve been better to mold these parts combined in fewer parts.

Step 31 installs the right side of the lower hull and firewall to the engine compartment. Some minor trimming and clamping are required for the side panel, but it eventually fits well.

Step 34 assembles the air filter and piping to the engine. The exhaust piping, parts Gc13 and Gc14 didn’t seem to be wide enough to fit around the engine without bending.

The engine and left side panel of the hull are installed in step 35, again with some minor trimming of the side panel. I dry fit the deck panels to make sure the side panels were correctly spaced and in the right location. The panels all fit nicely.

The front glacis panel is installed in step 36. The headlight, subassembly A, has a very delicate frame. I assembled the frame in place on the hull panel to assist with the assembly. The frame broke several times during later assembly steps, and it would be better to install the headlights much later in the assembly process. There are options for a clear or fresnel lens on the headlight. The step also has optional parts for the mine roller system. Part B11 or Pb1 provide alternates for a wood or metal board on the front of the hull.

Assembly of the road wheels and suspension is in steps 38 through 44. For the road wheels, note the tiny locating pins on all of the parts for correct orientation of the wheel halves. In step 40, I found a defect in the castings for the rear sprocket wheels, parts Ta1 and Ta2. The center hole was not drilled and there was considerable flash deforming the center of the wheels. I emailed Miniart and they quickly dispatched replacement parts. I held off installing the wheels until the replacement parts arrived. Very good customer service by MiniArt!

The rear deck panels for the hull are assembled and installed in steps 45 through 51. The louver panels over the engine and transmission bays are nicely detailed parts that assemble well. Photoetch screens are provided as well as some microscopic clips on the louver panel. Louvered panels over the fan and radiator are assembled in step 51 with individual photoetch slats for the louvers. I found it very difficult to get the PE slats located properly due to the small notches for their location. Be careful trimming the edges of these slats to maintain the notches on the ends of the slats.

This Part 1 of the T-55 review covers the lower hull, suspension, and interior detail. The second part of the review will include the incredibly detailed turret, track, fenders, and final assembly of the kit.

This is an excellent, fantastically detailed model kit. MiniArt has produced a kit with the finest detail and best-fitting parts that I’ve experienced! This certainly is a high standard for model kits!

All this detail comes at a price though. Lots of experience working with small (i.e. microscopic), and huge numbers of parts is necessary to complete this model. Patience and lots of time will be necessary to build this kit. So far, I’ve spent about 160 hours on assembly and finishing this example, and I’m only about halfway complete. In spite of the complexities, I’ve enjoyed this build immensely.

Many thanks to MiniArt for producing this fantastic kit and providing the review sample to IPMS! Thanks also to Ben Mirson at IPMS for helping with my questions.

Attaching the side panel